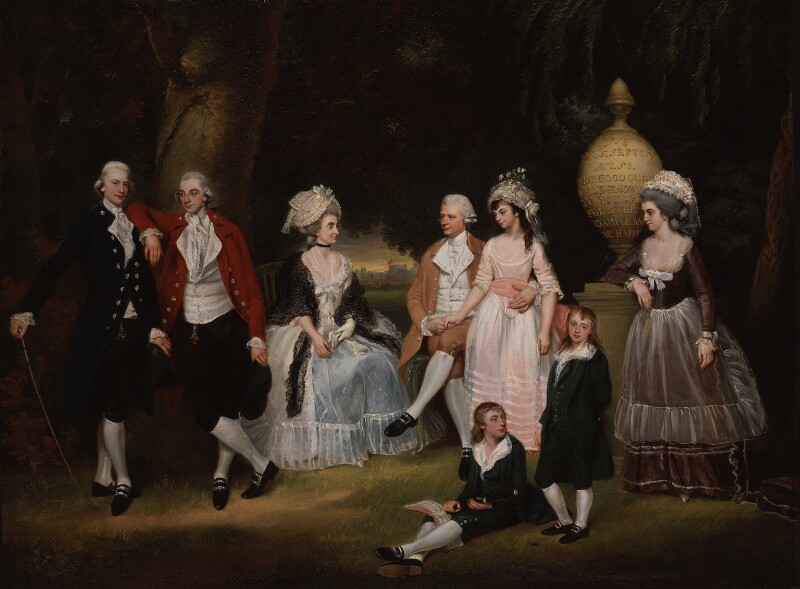 Henry Fourdrinier (1730-99) sits in a green chair fourth from the left in the back row; with a powdered wig, pale-brown suit, white striped waistcoat, white stockings and black shoes.
From the left in the back row: [1]
His son Charles (1767-1841) [2] blue eyes, powdered hair, wearing a blue coat with silver buttons, black breeches, his feet elegantly spread; a locket of gold, red and silver hangs at his waist.
His son Henry (1766-1854) [3] blue eyes, powdered hair, wearing a red-brown coat with silver buttons, white vest, black breeches, his dark grey hat in his left hand; a locket of gold, red and silver hangs at his waist.
His sister Mary (b. 1728, d. unmarried) in a green wooden chair, grey hair, wearing a white bonnet and black shawl, pale blue underskirt with white panelled dress and white gloves.
Either side of an urn commemorating his deceased wife Jemima, née White (1730-81 who married 1st William Manning) inscribed: J.F./OB.5 SEPTR.1781/AET.51./HER GOOD QUALI[ties]/WERE KNOWN/TO YOU ALL/FOLLOW HER/EXAMPLE AN[d]/BE HAPP[y], his daughter Jemima (1772-1836, married 1799 John Newman, Cardinal Newman was their son) dark brown hair, wearing a white cap, pink underskirt, white dress and pink sash and red shoes.
On the other side his step-daughter Minerva Manning (b. 1763) grey powdered hair, wearing a white bonnet, purple dress trimmed with silver, a white gauze apron and silver shoes.
In the foreground his fair-haired younger sons, John Rawson (b. 1770-c.1836) on the left and Sealy (1774-1847) on the right, identically dressed in green suits with white stockings and black shoes; John holds a sheet of music and a flute.
Henry Fourdrinier was a paper-maker and stationer in Lombard Street, London, son of the engraver Paul Fourdrinier (d. 1758) who came to London from Caen in 1720; his sons Henry and Sealy succeeded to his business, and in 1807 perfected a machine for the manufacture of continuous paper; the considerable costs of their experiments were only partially recovered in 1840, when Parliament made them an award, later supplemented by a subscription raised by the paper trade.
The setting is probably intended to convey the gardens of the Fourdrinier home in Stratford Grove, Putney, [4] although that hardly justifies a distant view of Windsor (if such it is). Miniatures of Henry Fourdrinier and of his sister Mary remained in the family's possession in 1937. [5]