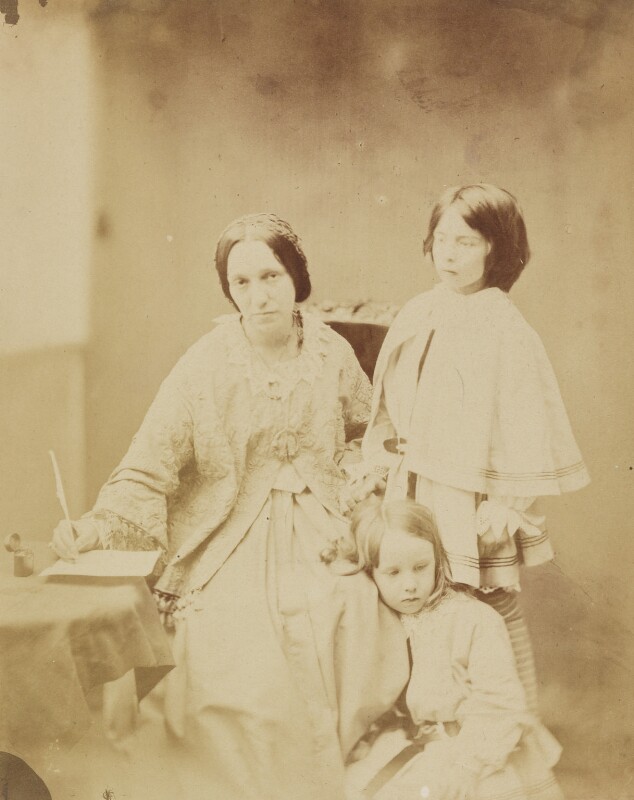 This family group of the sitter and her two youngest sons was taken by an as-yet unidentified photographer. It has been described as a ‘carefully staged portrait’ of a ‘rather willful-looking Cameron’ and one in which she probably ‘played a part in shaping the deft presentation of herself as both an attentive mother and a writer of some aspiration’. While her fixed expression may reflect the exigencies of long exposure times rather than wilfullness, her quill pen certainly represents ‘a very conscious allusion to her passion for correspondence’ and literary pursuits.[1] A decade earlier, Cameron had published a translation of Gottfried Bürger’s Leonora, illustrated by Daniel Maclise.

Traditionally dated c.1860, this image must be from an earlier year, and is ascribed by Cox and Ford to ‘about 1858’.[2] In 1860, Charles (Charlie) Hay Cameron (b.1849) and Henry Herschel Hay Cameron (b.1852) were older than they appear here. More conclusively, another photograph showing them in the same clothes is included in the album presented to George Frederic Watts, probably by Cameron, which has ‘Signor 1857’ embossed on the cover;[3] although in some cases Cameron subsequently added prints to existing albums, this title presumably records the original date of compilation.[4] The evidence thus indicates that the present work dates from 1857–8. The Camerons were then resident in Putney Heath, south London.

In April 1857, the family was visiting the Isle of Wight when Reginald Southey[5] took photos of the Tennyson sons and at least one picture of Charles and Henry Hay Cameron; in the last, their hair and clothing, including lace collars, are similar but not identical to those shown here and the boys look somewhat younger, Henry having his hair cut in a fringe.[6] While Southey’s authorship of the present portrait can be discounted, it is possible that his example prompted Cameron to commission another of the boys with herself, taken within a few months.

The extant prints of NPG P148 have visible large blemishes from the left-side corners of the negative image, indicative of non-commercial processing and printing. The image was once erroneously attributed to Charles Lutwidge Dodgson (Lewis Carroll); according to Olsen, it shares ‘the informal style of [both] Southey’s and Dodgson’s work’.[7] Despite the similarities, the photographer remains unknown, according to Cox and Ford. Intriguingly, however, his or her very anonymity seems to foreshadow Cameron’s action in 1859 of having portrait photographs of Tennyson taken to her specification – evidence of increasing involvement with the photographic process that led to printing others’ negatives before she acquired her own camera.[8]

Photographs of Charlie Cameron taken by his mother at a slightly later date are in the Albert Louis Cotton album now in the collection of the Julia Margaret Cameron Trust at Dimbola Lodge Museum, Isle of Wight, together with a group portrait of her four sons by another photographer.

Purchased with other loose album pages 1979.