8 of 12 portraits matching these criteria: 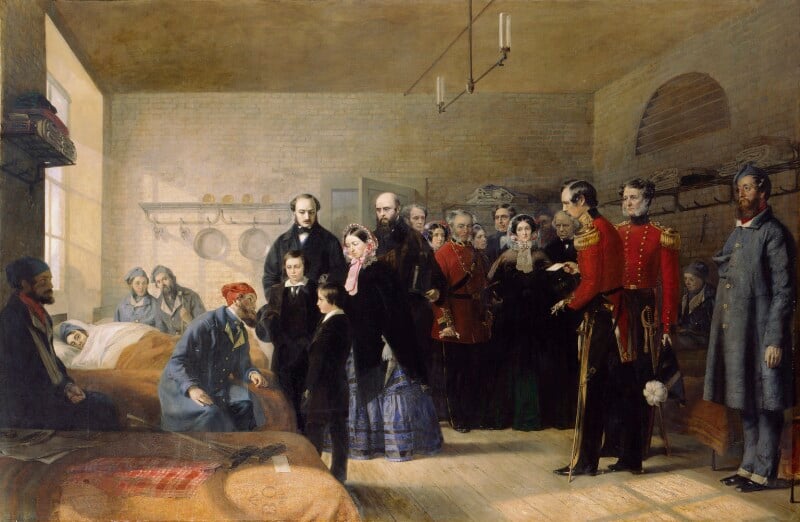 On Saturday 3 March 1855, Queen Victoria took the train to Chatham where she visited the newly reorganized military hospitals.

Her Majesty and the Prince, with the Prince of Wales … proceeded to Fort Pitt, and subsequently to the Invalid Depot [Brompton Hospital], where Her Majesty visited the wards occupied by the wounded and invalided men lately returned from the Crimea, inquiring into the cases of the different patients. Her Majesty visited 450 sick and wounded men. [1]

In her journal she noted ‘many sad wounds’ and the cramped wards, ending, ‘I cannot say how interested I was, & how well I understand the ladies devoting themselves to the nursing of these brave fellows.’ [2]

The Queen’s visit to the Chatham hospitals followed a series of well-publicized receptions at Buckingham Palace, only weeks earlier, to honour the invalids from the household regiments. [3] The country had been gripped by reportage of the Crimean ‘winter of disaster’, December 1854 to March 1855, and the Chatham visit, like the palace receptions, was the Queen’s personal and patriotic response to the crisis. In the words of the Manchester Guardian: ‘The feeling that prompted the visit [to Chatham] was womanly sympathy with, and Queenly regard for, the wounded heroes of the Crimea.’ [4]

Also present at Chatham, observing and sketching the scene, was a young artist, Jerry Barrett. [5] The Queen might have known the painting he had exhibited at the Royal Academy in 1851, Meeting of Queen Victoria with the Royal Family of Orleans, 1850 (792; untraced). What prompted Barrett’s new choice of subject? Executed in his painstaking ‘quite Pre-Raphaelite’ technique, [6] to include around 20 portraits on a large canvas, it was a brave commitment. But in March 1855, as the siege of Sebastopol dragged on, and evidence of political incompetence and disastrous mismanagement continued to mount up, he judged that the Chatham scene would be of lasting historical and pictorial interest. [7]

William Agnew, a Manchester art dealer and print publisher, also banked on the long-term appeal of the subject. He bought the painting and its copyright for £420, at some date after 26 March 1856. [8] By June he had engaged Thomas Oldham Barlow to engrave it ‘in the highest style of art’, a large plate to be available to subscribers only. [9] At the same time he paid Barrett’s travel expenses to Crimea, supportive of the artist’s plan to make a pendant to the Chatham image. This work was to be centred around the legendary ‘angel of mercy’: see The Mission of Mercy: Florence Nightingale receiving the Wounded at Scutari, 1857 (NPG 6202). [10] As the publisher behind Roger Fenton’s Crimean photographs of 1855, the Manchester dealer had built a reputation around such imagery.

To publicize the forthcoming print, Agnew’s lent the painting to the Royal Exhibition Gallery, 162 Piccadilly, London, in May and June 1856. The subject still resonated. It was a time of peace celebrations (29 May) as regiments continued to sail back from the east, disembarking to heroes’ welcomes. So Agnew’s publication project was applauded, with the Sun, for example, declaring that the print of Queen Victoria’s First Visit to her Wounded Soldiers ‘is destined, we doubt not, to be among the most popular pictures commemorative of the late war with Russia – a memorial to be hung up by many an English hearth, sacred as among the lares and penates of domestic art, generation after generation’. [11]

Press reviews of NPG 6203, primed by Agnew’s fulsome prospectus, were positive. The Morning Herald noted that likenesses of the royal family were taken ‘from photographs placed at the disposal of the artist by the Queen, together with the dresses worn by herself and the Prince during the visit. The other portraits are from actual sittings, and all are perfect to the very life.’ [12] The Athenaeum approved: ‘It is a work of minute truth and fidelity, the subject well treated, and the painting careful throughout. … The event was worth recording, and will hold its place in history.’ [13] Reviewers noted that of the seven soldiers pictured, five were true portraits. Barrett’s portrayal of the Queen leaning on Prince Albert’s arm, flanked by her eldest sons, her back to the retinue of officials, engrossed in the spectacle of ‘those who had fought to save her and her realm, – not for ambition, but for duty’, was also praised in the Athenaeum. [14]

Of the 21 figures portrayed, Barrett spotlit half a dozen besides the tight-knit royal group. These included a sombre Duke of Cambridge (he had been invalided out of Crimea); the Queen’s lady-in-waiting Charlotte Canning, active in nursing organizations, her femininity enhanced by the military setting; the staff surgeon, Henry Cooper Reade, shown explaining the nature of the injuries; and among the soldiers, the heroic Sergeant John Breese, ‘who left his arm among the Muscovites, but took from them a dozen lives to balance the account’,[15] standing to attention at right. The extent of Barrett’s transformation of the scene, expanding the cramped ward into a setting broad enough to accommodate an elegant narrative, becomes clear when the painting is compared to a newspaper illustration of the same event, which shows the royal visit processing down a double row of standing veterans, as in a military review. [16]

In May 1858 Agnew’s exhibited Barrett’s two Crimean paintings, NPG 6203 and NPG 6202, at Hayward and Leggatt in the City of London, to attract yet more subscribers for the prints. [17] NPG 6203, hung alongside the bright and freely painted NPG 6202, now looked a shade dull. The figure of the Queen, wearing the ‘ordinary out-of-door habiliaments [sic] of an English gentlewoman’ of 1855, [18] appeared homely by comparison with Nightingale in her exotic setting, though such disparities were evened out in the process of print production. Reviewing the 1858 exhibition, the Athenaeum praised the ‘care and quiet earnestness’ of Barrett’s portrait of the Queen, noting that ‘[a] painter of panoramic and occasional newspaper subjects is much to be pitied. His fame is bright and transient as the light of a Cremorne rocket’. [19] Overall, the opinion was that Barrett’s Pre-Raphaelite eye for truthful detail (see the Huntley & Palmer biscuit tin, copy of the Illustrated London News, regulation blankets and blue coats, etc.), and respect for decorum, well equipped him to be a painter of contemporary history.

M.P. Lalumia writes that Barlow was paid £425 to engrave NPG 6203, and gives Agnew’s scale of prices for the edition; it comprised ‘three hundred artist’s proofs selling at ten guineas, two hundred proofs before letters at seven guineas, five hundred proofs with the letterpress title at five guineas, and an unspecified number of “prints” – struck after the first one thousand copies – at three guineas each’. [20] In other words, even the cheapest impression was expensive. Publishing fine art prints had been Agnew’s aim in acquiring Barrett’s Crimean paintings; and, with public sentiment still running high, stoked by publication of the 1858 Royal Commission and other reports, the subject continued to signify. The dealer’s long-term backing of Barrett was repaid. As for Barrett the 1858 prints made his name, though apparently none of his later work came near to matching this success.

There is a small watercolour sketch, unsigned, inscribed ‘Queen Victoria’s first visit to her wounded soldiers. Chatham Hospital / [?]5 March 1855’, in the Henry Newman Papers, Friends’ House Library, London. [21] Otherwise, no works associated with NPG 6203 are now located. Barrett’s original hospital sketches are untraced, [22] as is the ‘sketch’, probably a small painted version, that he took to Scutari in May 1856 and showed to Florence Nightingale in an attempt to coax her into sitting. [23] On 24 May 1856 a Court circular recorded that the Queen had been ‘pleased to express her admiration of this work of art, by securing the original study, by graciously according every assistance to the artist in securing exact likenesses, and by allowing the engraving to be dedicated to her’; this study too is untraced. [24] In January 1860 Barrett wrote to Agnew asking to borrow back the painting, as the Queen had commissioned a small replica and he could only get so far by working from the print. Barrett received £150 the following March for this replica, which is no longer in the Royal Collection. [25]

NPG 6203 and NPG 6202 were eventually sold by Agnew’s to a Liverpool shipbuilder, Sir Edward Bates, 1st Bt, of Gryn Castle, near Holywell, Wales, in 1859. [26] The paintings then dropped from public view [27] until put up for sale by the Bates family at Christie’s on 5 March 1993, lots 108 and 107 respectively. The National Army Museum, London, showed early interest in the Chatham scene but withdrew after ascertaining that the National Portrait Gallery was working to acquire the pair. Queen Victoria’s First Visit was estimated at £80,000–£120,000, less than The Mission of Mercy; yet on the day of the sale it went for more, at £180,000 (or £202,912.50, including buyers’ premium and VAT on the premium). Generous grants of £50,000 from the National Heritage Memorial Fund (NHMF) and £22,550 from the National Art Collections Fund (NACF) for Queen Victoria’s First Visit alone helped the Gallery triumph in its acquisition campaign; see NPG 6202 for further details.

The two paintings are approximately the same size and set in closely matching frames; [28] hidden under the sight edge of the frame of NPG 6203 is a 40mm-wide strip of unpainted ground scored with pencil marks, which relate to the squaring-up process. The painting was relined in the earlier twentieth century. For related works by Jerry Barrett at the NPG, see NPG 2939, NPG 2939a, NPG 3303, NPG 4305, NPG 6202 and NPG D43044.

Keller 2013
Keller, U., The Ultimate Spectacle: A Visual History of the Crimean War, New York and Abingdon, 2013.