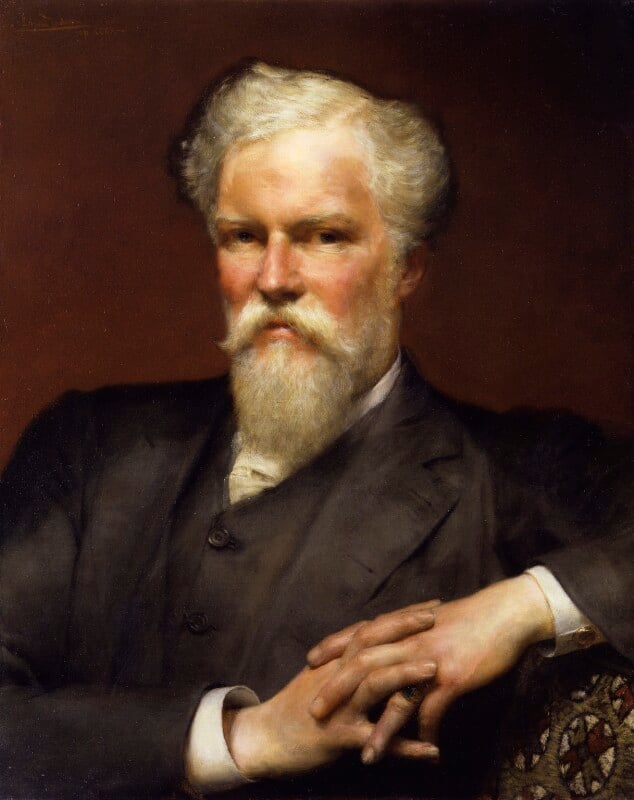 Waterhouse’s painted iconography is small: a profile by Arthur Stockdale Cope (1886); a presidential portrait by William Quiller Orchardson for the RIBA, London (c.1890); and, close in date, a private commission from Lawrence Alma Tadema (1891), now NPG 6213 (see ‘All known portraits’).

From the 1880s Alfred Waterhouse lived between his London home and offices at 8 New Cavendish Street, and Yattendon Court, the house he built himself near Newbury, Berkshire. The Alma-Tadema portrait hung at one of those addresses during his lifetime; it was certainly at Yattendon after his death in 1905. [1] The Waterhouses entertained regularly in the spring, and the Alma-Tademas belonged to their set of friends:

Through the spring of each year the house in New Cavendish Street was the setting for weekly dinner parties in candle-lit rooms where the guests included Hamo Thorneycroft[sic] the sculptor, Frank Dicksee, Alma Tadema and Edmund Gosse, whose wives were sisters, Mr Humphry Ward and Mrs Humphry Ward, James Bryce and his sister Julia Gaskell, Benjamin Jowett the Master of Balliol, as well as old family friends. [2]

From his earliest days as an art student to a few months before his death Alma-Tadema assigned numbers to each of his paintings. Accordingly his portrait of Waterhouse is inscribed ‘CCCX’, that is, no.310 in an oeuvre that eventually comprised 408 works. The gilt-pine frame was made by Alma-Tadema’s framemaker, R. Dolman & Son. [3] This image of the architect was widely publicized through halftone photographs, many of them reproducing highlights of exhibitions in the 1890s. [4]

Nevertheless the painting was untraced when V.G. Swanson published his Alma-Tadema catalogue raisonné in 1990. [5] It was consigned to auction at Bonhams by a descendant of the architect on 17 June 1993 (222), with an estimate of £3,500–5,000; in the event the hammer price was much higher, £26,000, reflecting the desirability of this portrait for the National Portrait Gallery’s collection.