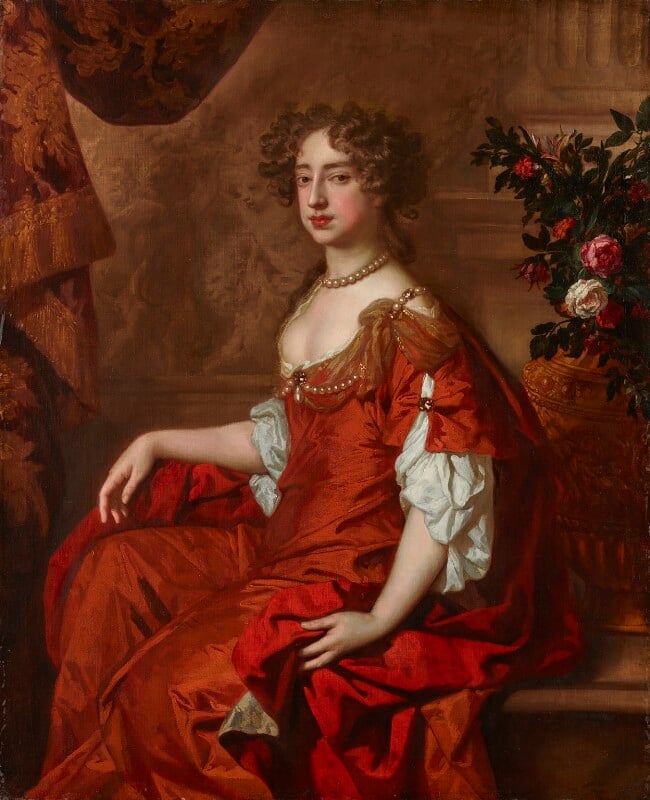 Painted at about the time of her marriage in the autumn of 1677, the orange colour of her dress perhaps referring to her new title of the Princess of Orange. While the portrait is substantially by Lely, it is possible that the vase of flowers was painted by Henry Lankrink who was said to have painted flowers, among other things, in those pictures which Lely ‘intended to gain Esteem by’. [1] A related version in the Royal Collection shows her seated in a carved chair with the fluted column on the left, [2] probably pair to a portrait of William at Syon House. Another good early version is in a private collection in The Hague. [3] Other versions include Sotheby’s, 9 April 1977, lot 23 (wearing a silver dress); formerly with W. Stirling of Keir; in the musées Royaux des Beaux-Arts de Belgique (3514) and, reduced (49 x 41cm) and attributed to C. Netscher, in the Landesmuseum, Mainz (see William III, NPG 1902). A half-length is with Lord Montagu of Beaulieu, and a bust-length miniature attributed to Richard Gibson was sold Sotheby’s, 20 July 1981, lot 5.
James II owned four unfinished half-length portraits of Mary by Lely (and one of the Prince of Orange). [4]