Plenipotentiaries of Britain, Holland, Prussia and Russia signing the Treaty of 1791 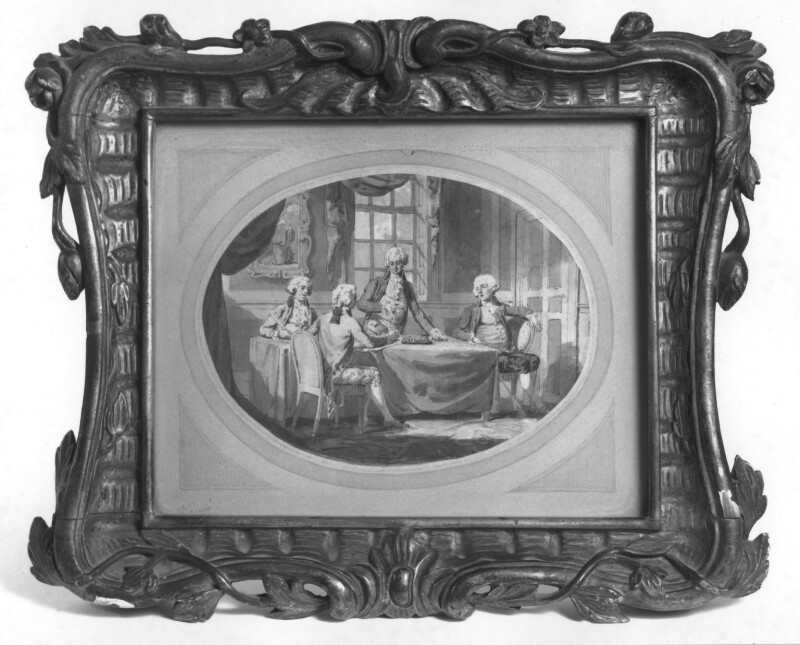 Plenipotentiaries of Britain, Holland, Prussia and Russia signing the Treaty of 1791

A paper stuck to the back of the frame is inscribed: Copy of Inscription on the paper at the back of the Drawing by Dayes./Watercolour by Dayes to be engraved for Ashburton's History of England published 1791 by J. Stratford 112 Holborn Hill. Subject - Plenipotentiaries of Great Britain, Prussia, Holland & Russia signing the preliminaries of Peace at Saint Petersbourg between the Empress & the Porte - August 1st 1791/Has been engraved by Warren. Presented to the owner H. C. Eyres by the Grand-daughter of the Publisher 1892.

The colour is suffused with the cold blue-grey wash characteristic of Dayes's work, but there is no record of his having been to St Petersburg and the drawing is probably made up, perhaps from notes brought back by one of the British envoys. Among the allied plenipotentiaries at the signing of the preliminaries were Colonel Charles Whitworth and his colleague William Fawkener, Count Goltze (Prussia) and Count Osterman (Russia), but the figures are elegant puppets and can in no way be considered as portraits.

Not mentioned in The Works of the Late Edward Dayes, 1805.

J. Stratford (publisher), his granddaughter and given by her to H. C. Eyres; acquired by Alan Evans and part of his bequest to the National Gallery 1975.

By Charles Warren for Ashburton's History of England, p 938.