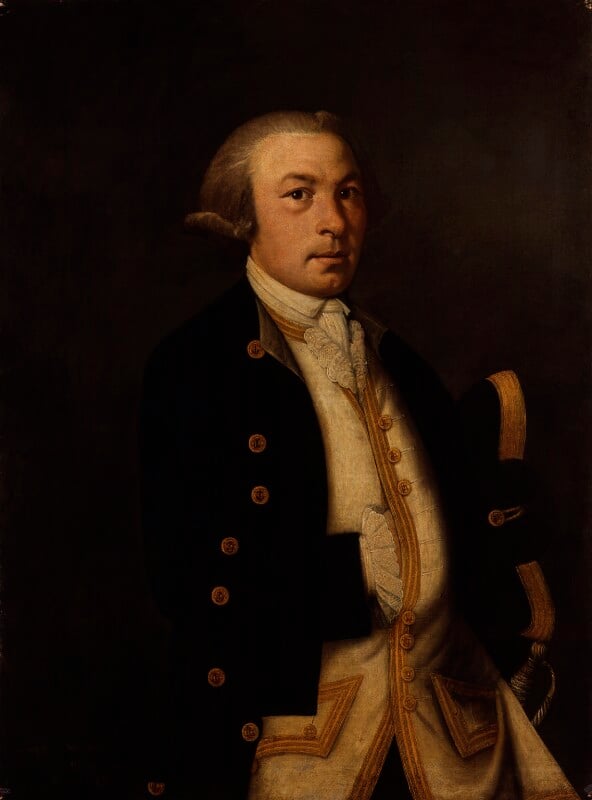 Acquired as a portrait of Captain Cook, but there is no resemblance between NPG 1414 and his three authentic portraits. The ‘Captain Graves’ of the inscription was governor of Newfoundland 1762-64; Cook made annual surveys of the Newfoundland coast in 1763, 1764, 1765 and 1766. There is a slight resemblance to Captain John Gore (c.1730-90), according to the portrait by John Webber (Nan Kivell collection; Canberra); [1] Gore served as third lieutenant under Cook in 1767-71 and first lieutenant in 1776-9. In 1916 Collins Baker suggested an attribution to Bickeray, [2] an artist otherwise unknown.

Brown eyes, powdered hair; the uniform somewhat resembles that of a naval lieutenant:1 dark blue coat with blue lapels and a white lining, and gold buttons bearing a four-petal rose with an anchor painted over; white neckcloth and waistcoat, the buttons similar to those on the coat.

1 Comd. May of the National Maritime Museum tentatively suggested, mainly from the cut and length of the waistcoat, that it might show an early lieutenant’s uniform (note of 3 November 1953; NPG archive). Cook was promoted lieutenant in May 1768.

1 ‘The portrait was acquired by purchase & from what I have heard I believe was formerly in the possession of the Palissers & Cook-Herveys who I think were related’ (J. A. East to Cust, 9 August 1905). Palisser doubtless implied Admiral Sir Hugh Palliser, governor of Newfoundland 1764-69 and an admirer of Cook.
2 East had previously offered another portrait of Cook to the NPG in 1902 'with his hand on a globe and ascribed to Zoffany’ (letter from East, 5 February 1902; NPG archive).