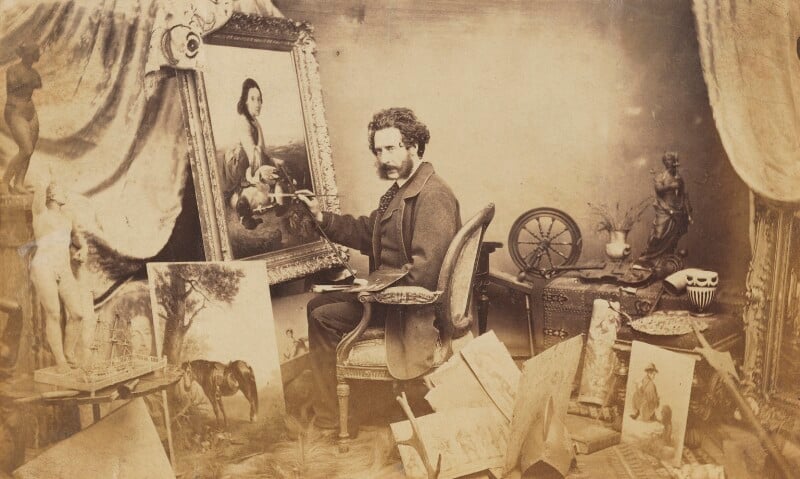 This portrait dates from the late 1850s, after the sitter came to general and controversial acclaim in London with his painting The Mitherless Bairn (RA 1855), which was hailed as one of the ‘pictures of the season’ by many critics, but damned as ‘the most commonplace Wilkieism’ by Ruskin. Despite this, ‘the public recognised the merit of the artist and placed him on the pedestal which he now justly occupies’.[1]

Photographer George Herbert Watkins opened his Regent Street studio in 1856, and in 1857–8 produced a series of photographs of distinguished contemporaries, published in collaboration with Herbert Fry, with printed biographies under the title of National Gallery of Photographic Portraits. Advertisements for these claimed that Watkins’s photographs were ‘as remarkable for their agreeable fidelity to nature as for their brilliancy of production and their economy of cost’.[2] (See also NPG Album 39, ‘Photographs and Autographs – Herbert Fry’s Picture Gallery’.) Faed was not included in the first series, which opened with Lord Palmerston, so his portrait presumably dates from some time after mid-1858. It is mounted in the album NPG P301 compiled by the photographer, entitled ‘Photographs by Herbert Watkins’, of which this is no.45 (see also that of Millais, NPG P301(36)).

The (finished and framed) painting on the easel is not easy to identify with any of Faed’s well-known works, although several show single female figures in landscape settings with a low horizon. One possibility is the Ayrshire Lassie (RA 1858 (498); untraced), whose date would accord with the presumed date of the photograph.

Faed ‘gloried in his realism’ and his studio was ‘full of carefully executed studies for his finished pictures’,[3] together with authentic props such as the spinning wheel, antler, axe and iron helmet visible in this scene. The spinning wheel features prominently in John Ballantyne’s portraits of Faed in his studio (see ‘All known portraits, By other artists, 1863–5’) at 1 Cavendish Road, St John’s Wood, where Faed lived and worked from 1856 to 1864.

It seems unlikely that the photograph was taken in Faed’s studio, since all Watkins’s other photographs were taken at his own premises; moreover, the technical demands of transporting photographic equipment elsewhere were great. In this case, however, the canvases and artist’s props seem so plainly to relate to Faed that either they were taken to Watkins’s studio for the occasion or, very unusually, Watkins diverged from normal practice to photograph Faed in his own working environment. The latter explanation would also account for the unusual horizontal format of the present image; almost all Watkins’s other images follow the conventional ‘portrait’ formats of a head study, half- or whole-length, taken in a photographic studio. If the picture was taken in Faed’s studio, it represents an early example of the genre ‘The artist at work’.

The album in which the photograph is contained was consigned by Phillip Walker to Christie’s, 27 June 1985 (169) but failed to reach the reserve price of £2,000–3,000. Walker then offered it to the NPG and it was purchased for £1024. Giving what little he knew of the provenance he wrote, ‘I am afraid the album had been through other, antique trade, hands before I acquired it so my information about it is indirect. I was told that it had lain, with many other papers, on the floor of the scullery of a Norfolk farm house – hence its very damp condition. The papers were said to have belonged to a Mr Raghan, who had died in his 80s, and who had been in the theatrical world in some capacity.’[4] The album remains in a very fragile condition.