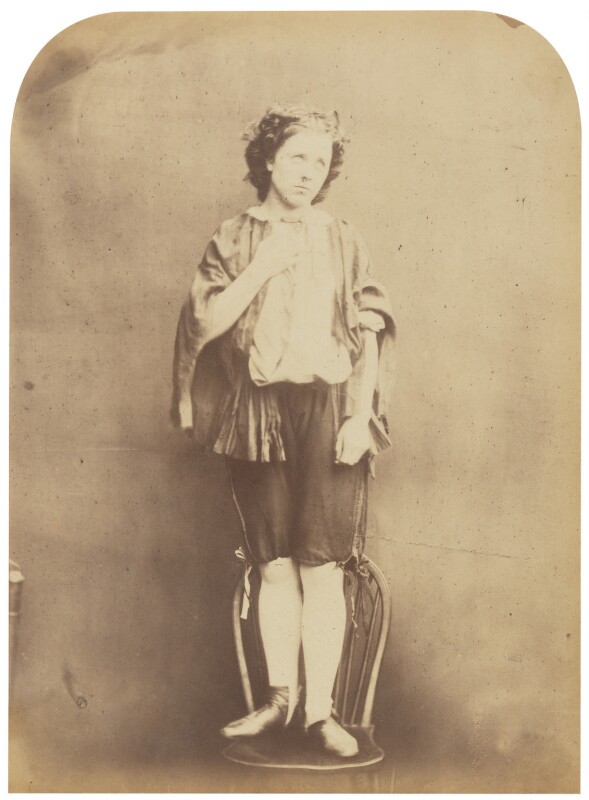 This is one of three images of Marie Wilton before she married Squire Bancroft, in an album compiled by the photographer comprising a series of photographs of famous personalities: see NPG Portrait Set ‘The Watkins album: photographs by Herbert Watkins, late 1850s’. They date from Marie’s debut season at the Lyceum Theatre, London in autumn 1856, aged 17. All three show her in theatrical costume. Here, as the inscription informs us, she is costumed as the boy Henri in the melodrama Belphegor the Mountebank: or, Woman’s Constancy by Charles Webb; this played in a double-bill with Perdita (see NPG P301(70)). [1]

Henri was the role in which Marie first came to public notice, at the King Street Theatre in Bristol. The lead actor, Charles Dillon, on transferring to London, offered her the part, first at Sadler’s Wells and then at the Lyceum, which furnished her introduction to the West End. At the Lyceum the production opened on 15 September. At the end of the first act, she recalled, ‘where my best scene occurred with Mr Dillon, the applause was very prolonged and there was a great call’. [2] The Illustrated London News noted that the drama was ‘exceedingly compressed’ and that Marie ‘distinguished herself favourably’. [3] The Bristol Mercury published a summary of very positive critical opinion under the heading ‘Miss Marie Wilton’:

This established Bristol favourite made her metropolitan debut this week at the Lyceum Theatre and at once established a reputation as an actress of judgement, taste and spirit. The critic of the Morning Post says ‘Miss Marie Wilton is a young, apparently very young, lady quite new to us, but her natural and pathetic acting as Henri, the son of Belphegor, in the starvation scene, showed her to possess powers of no ordinary order, which fully entitled her to the recall she obtained at the end of the second act.’

After citing ‘similarly flattering terms’ in the Morning Chronicle, Daily News, Morning Herald and ‘other papers’, the summary concludes: ‘Indeed Miss Wilton’s success was most decided.’ [4]

However, George Eliot (Mary Ann Evans), who was in the audience on 20 September, commented privately of the whole piece that ‘the acting is very so-so’. [5] In her journal for that day, she recorded: ‘This evening we went to see Dillon in Belphegor at the Lyceum. Came home with a distracting headache.’ [6]

Belphegor and Perdita opened on 15 September 1856, and the three photographs were probably taken soon afterwards. Marie was not cast in any other roles at the Lyceum, where the season ran from September to April, in which month she appeared as Cupid at the Haymarket Theatre. The costumes will have been taken to Watkins’s studio for the occasion.

Whole-length to front, standing on chair in theatrical costume as a boy.