3 of 72 portraits matching these criteria: 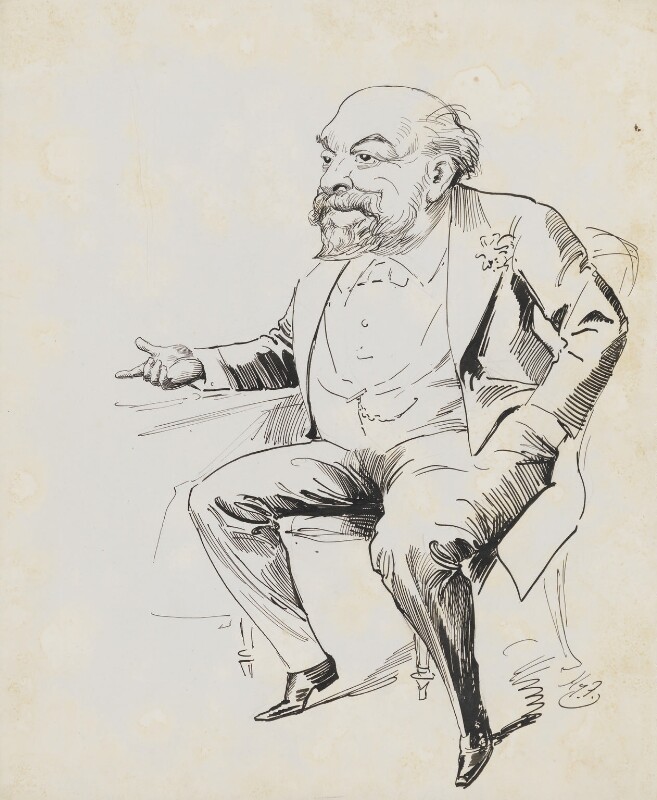 Outside his professional life, Critchett had friends in the theatrical and literary professions ‘from the days of the Bancrofts and Kendals to those of Irving, Tree, Wyndham and Alexander’, and he ‘once expressed his appreciation of any men who might be called “clubbable”, for this adjective [to him] meant a friendly and sociable soul and not merely a “club-man”. His own favourite club, particularly in the days of the late Victorian and early Edwardian years, was the Garrick.’ [1] This drawing by fellow-member Harry Furniss therefore depicts Critchett in evening dress at the Garrick Club in the Covent Garden area of London, conversing animatedly.

Through his dramatist brother, and owing to his own appointment as ophthalmic surgeon to the Actors’ Association and the Royal Academy of Music, Critchett had a wide acquaintance with the world of entertainment from which the Garrick drew much of its membership. According to contemporaries, ‘he had a ready wit and a happy art of turning a phrase, and even a delight in an old-fashioned paronomasia [punning]’. [2] He could also suffer fools gladly and never seemed bored. [3] Although himself no bon viveur, Critchett’s enjoyment of social gatherings is illustrated also in Solomon J. Solomon's group portrait at dinner Your Health!, also known as An Octave for Mr Ernest Hart at Sir Henry Thompson’s House and At Sir Henry Thompson's House (see ‘All known portraits, Paintings, drawings, sculptures and prints, c.1897’). Here he is shown with a rotund abdomen and slightly bulging eyes, which may be an oblique comment on his profession.

Although it is difficult to date many of Furniss’s caricatures precisely, it is likely that he drew Critchett in the years when the surgeon was professionally most eminent and most frequently at the Garrick, that is between 1895 and 1910. This drawing is one of 130 prepared by the artist for Furniss [publ.c.1913–16] and was perhaps redrawn for publication. Closer inspection suggests that often sketches done from life were redrawn in ink onto an appropriate figure for the purposes of reproduction; many of the sketches of other sitters show a very similar pose to the present work, seated to left, with right hand extended as if in exposition, left hand in trouser pocket.