5 of 122 portraits of Sir Henry Irving 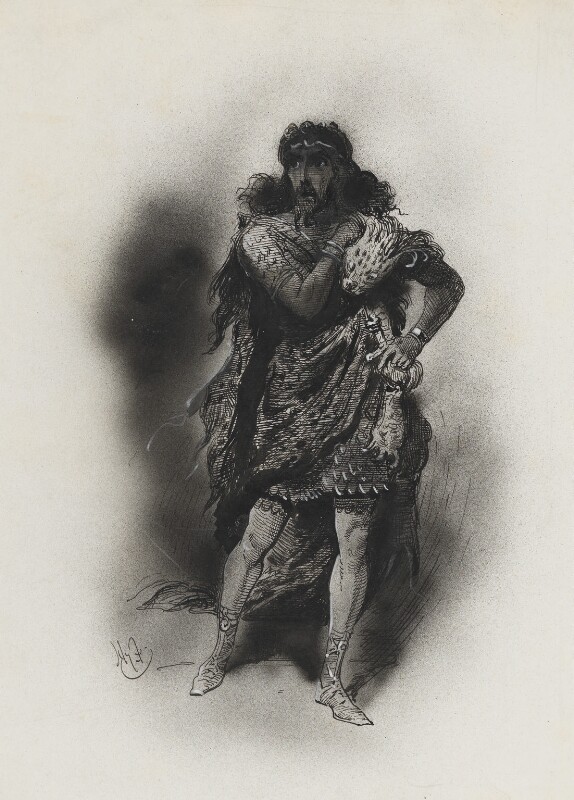 At Henry Irving’s request, Alfred, Lord Tennyson wrote The Cup, a short tragedy destined for the Lyceum Theatre. The first night was 3 January 1881. Irving was responsible for the lavish production (‘it almost seemed as if stage decoration could go no further’); [1] and he also played the part of the tyrant Synorix. Ellen Terry wrote that as he ‘was not able to look like the full-blooded Roman such as we see in long lines in marble at the British Museum, he conceived his own type of the blend of Roman intellect and sensuality with barbarian cruelty and lust. With a pale, pale face, bright red hair, gold armour and a tiger skin, a diabolical expression and very thin crimson lips, Henry Irving looked handsome and sickening at the same time.’ [2]

In Furniss’s opinion, artists had everything to gain from watching actors perform on stage. He wrote that ‘artists derive much benefit from the theatre, whither they go to learn […] they can now sit in the stalls of the Lyceum theatre and get a lesson in motion, attitude, and the movement of drapery, from such a master of those arts as Irving’. [3] Irving’s animated pose in NPG 6251(29) proves this point. Furniss used to sketch Irving at dress rehearsals; [4] as he wrote, ‘I had exceptional opportunities of knowing him. He and I were very old friends, and I made a careful study of him in fifty of his best-known characters. Every one of these sketches he approved of.’ [5]

In this highly finished drawing, the incense-laden atmosphere of The Cup is conveyed by use of the ‘Aërograph’, a tool Furniss described as ‘a machine brush in which the air is pumped through a many-pointed, fine-tubed pen, and throws a spray of ink over the paper, with very soft and wonderful effects’. [6]

The artist; his sons, from whom purchased (through Theodore Cluse), April 1947; transferred to Main collection, 1994.