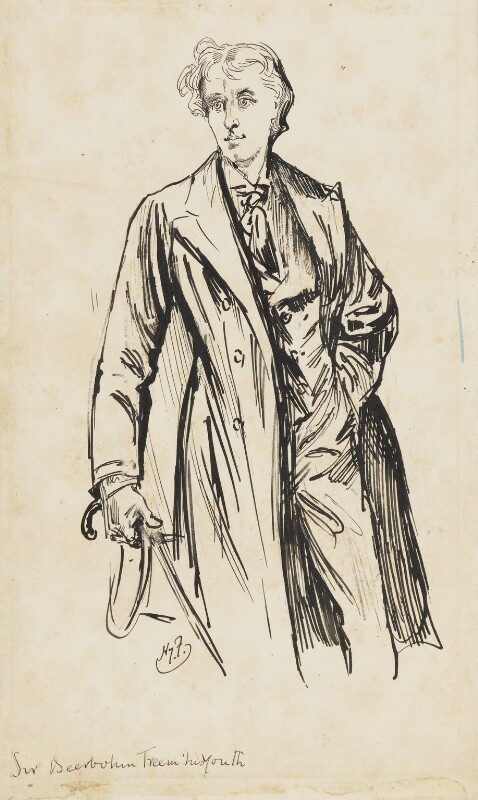 Herbert Beerbohm Tree’s height and red hair were his most striking features as a young man. Max Beerbohm, his half-brother and 19 years his junior, looked up to him: ‘Herbert seemed very tall … and his hair was of a very bright red.’ [1] Edmund Gosse observed Tree’s self-fashioning also: ‘In youth … he had not arrived at that impressiveness which he achieved at last. He was then, in fact, – with his red hair, his pale complexion and faint eyes, – the reverse of impressive off the stage, and I think he may have adopted what I call his “elegance” of manner in order to remove this deficiency.’ [2]

Harry Furniss first met Tree, a ‘tall, slim reddish-headed, irresponsible youth’ with a talent for parodies, at one of his own studio parties in Newman Street in the West End of London. [3] NPG 6251(62) shows him at that time: an 1870s image though possibly drawn later; not a caricature. Furniss’s books My Bohemian Days and Paradise in Piccadilly abound in descriptions of Tree at different points in his life, including sharply observed passages on the friction between Tree and Sir Henry Irving. [4]

Transferred from the NPG Reference Collection, 1994.