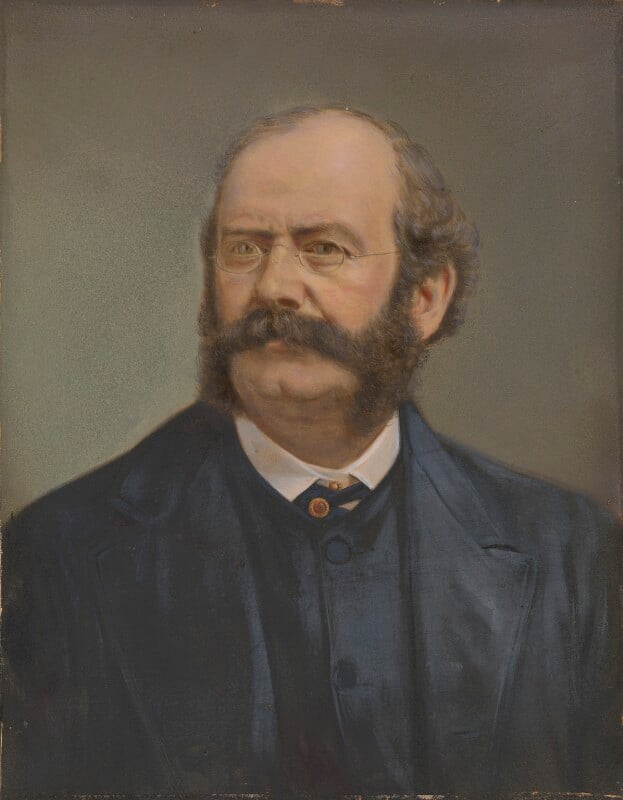 Henry Van der Weyde was a painter and photographer. As well as exhibiting at the Royal Academy from 1875 to 1900 he also ran a very successful photographic studio at 182 Regent Street. He was the first professional photographer to use pure electric light. This innovation involved a gas-driven Siemens dynamo and a four-foot parabolic reflector which produced the brilliance of ‘6,000 candles’; sittings were quick and efficient and not subject to daylight or weather conditions.[1] The Van Der Weyde Electric Studio operated from 1878 until 1902.

Theodore Blake Wirgman made a sketch after the pose represented by NPG P552, in reverse, for a page of portraits of ‘New Associates of the Royal Academy’ in the Graphic in 1881.[2] And when Burges died only a few weeks later, the Van der Weyde photographs were the only available images to illustrate the obituaries. The sobriety of the pose gives little idea – just a hint in the jewelled tiepin – of the extravagance and true eccentricity of Burges’s private life: at his tea parties ‘the meal [was] served in beaten gold, the cream poured out of a single onyx, and the tea strictured in its descent on account of real rubies in the pot’.[3]