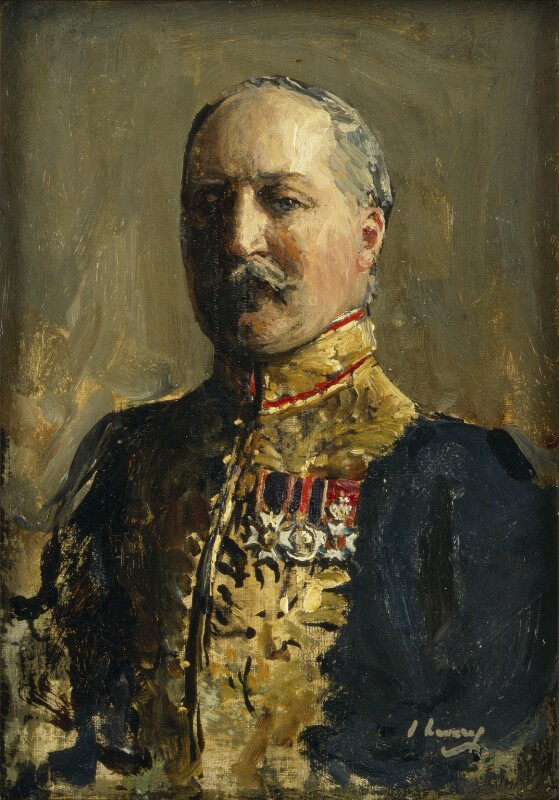 In 1912, at the time of his portrait by John Lavery, Lionel Cust was in his mid-fifties, Surveyor of the King’s Pictures and Gentleman Usher to George V. He had resigned the directorship of the National Portrait Gallery in 1909 – a post which he had held since 1895 – but continued to be very active, combining court duties with publications on the Royal Collection and editorship of the Burlington Magazine. ‘Cust was […] a respectable scholar and a conscientious Surveyor; although he wasted time in additional duties as a Gentleman Usher, which he much enjoyed, he got through a lot of work,’ remarked a successive Surveyor. [1]

In 1912 Lavery’s London career was also in the ascendant. In 1910 he had made a glamorous marriage, the following year he had been finally elected ARA and in 1912 he was approached by the publisher Hugh Spottiswoode to paint the huge group of King George V and his family at Buckingham Palace, for presentation to the NPG (see NPG 1745). It is possible that there was some causal link between this 1912 portrait of Cust the courtier and those of the Royal family, which were executed in the winter of 1912–13.

Lavery depicts Cust in the gold-embroidered court dress of a Gentleman Usher. [2] A stickler for protocol, Cust devoted paragraphs of his memoirs to describing this uniform (‘… two gold-braided coats and an over-coat, cocked hat, sword, white breeches as well as trousers, and their accessories’), and his satisfaction at acquiring a second-hand ‘full-dress gold-laced coat at a very much reduced cost’. [3]

The right side of the picture is strongly lit, and Cust fixes the spectator with a very blue eye. One of the reasons he resigned the NPG directorship in 1909 was ‘repeated trouble in the eyes, arising from a slight injury to the left eye in my youth’. [4] Charles Holmes, his successor at the Gallery, later recalled the day in July 1909 when he was invited to Cust’s office and found him ‘seated, as usual, at the end of the long table in the Gallery Board Room, with its big windows, tall glazed book-cases and cheerful fireplace, the very model of what a Director’s room should be. Cust was wearing dark blue glasses, and seemed worried over the future of the Gallery.’ [5]

Cust was interested in picture frames (‘he took great delight in the craftsmanship of a beautiful frame’) [6] and in NPG 6337 he was well served by the renaissance-style cassetta frame made by Emile Remy, a French craftsman favoured by Lavery at this period. [7] The foliate border and gilt arabesque frieze appear almost integral to and an extension of Lavery’s painting.

Portraits of Lionel Cust are rare, and until the acquisition of the Lavery sketch he was not represented in the NPG’s Primary Collection.[8] The portrait, which has no traceable provenance but was presumably once in the Cust collection, was purchased for £3,000 (hammer price) at Phillips, 6 June 1995 (153). [9]