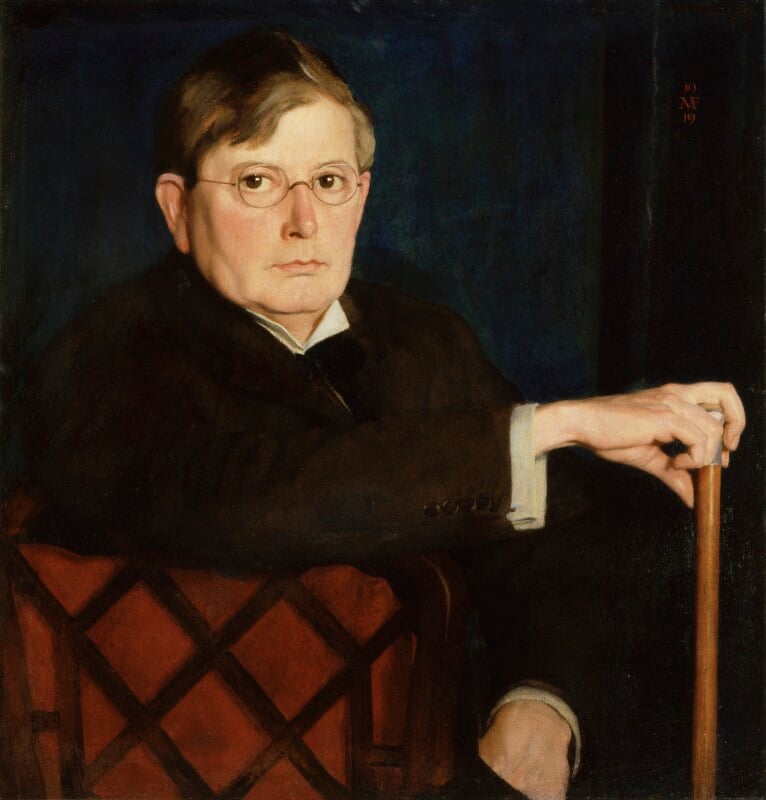 This forceful oil portrait by the sitter’s son was executed when Frampton was approaching sixty and at the height of his fame, with many public commissions to his credit, including the soon-to-be unveiled memorial statue of war heroine Edith Cavell and a figure of the 1st Marquess of Linlithgow (maquette RA 1919 (1649), statue erected at Linlithgow).

Painted at 90 Carlton Hill, St John’s Wood, where father and son had adjacent studios and where Meredith Frampton resumed his career after war service, it forms a companion to the portrait of Meredith’s mother painted in 1918. [1] The sculptor’s strong right hand is shown resting on a silver-topped cane, perhaps in oblique allusion to his venerable status, with the arm boldly across the torso to indicate authority. The portrayal also endows the sitter with physical bulk and a penetrating gaze, while also conveying the impression of intense stillness that would become his son’s artistic hallmark. Stylistically, the work pre-dates the ‘finely-finished, almost obsessive’ realism of Meredith Frampton’s mature manner, [2] with its ‘impeccable’ surfaces, [3] although some roughness may be due to the canvas’s vicissitudes. Originally with the family, the work vanished for at least two decades, probably after bomb damage to the artist’s studio during the Second World War; it re-emerged in 1967 with a dealer in Connecticut, who sold it for $10 at an antiques fair. [4]

Two other works by Meredith Frampton are in the National Portrait Gallery collection, portraits of Henry Newbolt (NPG 4664) and Winifred Radford (NPG 6397), and his portrait of King George VI is on long loan (L214).

Sitter’s family; PDQ Antiques Connecticut; 1967 Carol (Mrs Millard) Prisant NY, by whom offered in 1986 and from whom purchased in 1995.

For an intaglio print after this work see ‘All known portraits, By other artists, 1919’.