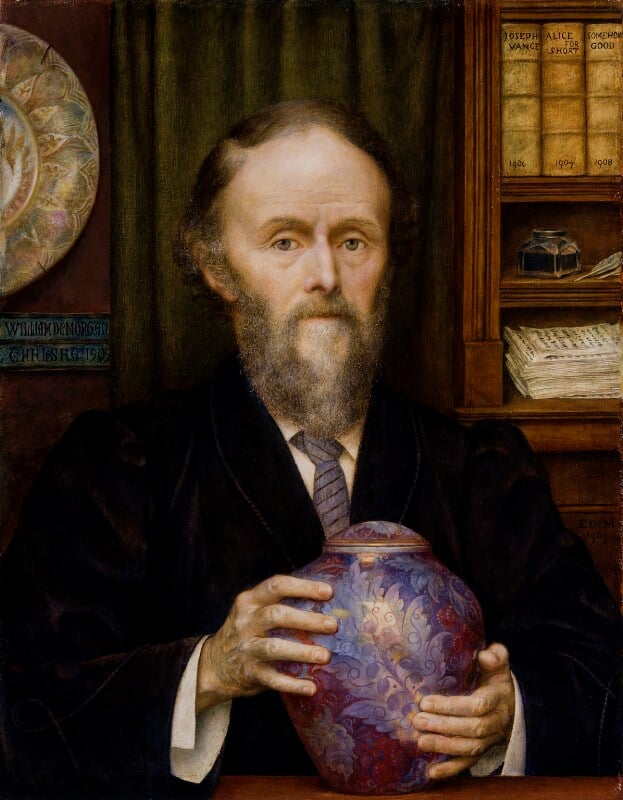 The second of two oil portraits of William De Morgan by his wife, Evelyn De Morgan (née Pickering), this was painted shortly before the sitter’s fourth novel was published. The earlier work (see ‘All known portraits, By other artists, 1893’) lacks accessories; NPG 6358 shows him ‘surrounded by tokens of his two professions’. [1] Both portraits use the same green background: tiles in the earlier work, drapery in the later. A chalk drawing dated to 1907 appears to be a study for the present work. [2]

Depicted in the bookcase to the right are bound volumes of De Morgan’s first three novels, Joseph Vance (1906), Alice-for-Short (1907) and Somehow Good (1908), together with inkwell, pen and loose manuscript sheets of the latest work, It Never Can Happen Again (1909). He holds a lidded jar in iridescent lustreware, decorated with a vine design, said to be one of the last he made before relinquishing pottery production. It is now in the Victoria and Albert Museum.[3] According to the artist, ‘the last pieces of lustre-ware he produced in the dying factory [in Fulham] were the best he had ever done’. [4] In the painting the sitter’s left hand was previously positioned slightly higher, as if hugging the jar; it is possible the change was made with the addition of the sill or ledge on which the pot stands. In the left background is part of a large dish also designed by De Morgan.

The face in the picture was a faithful likeness, save only that the look of bright animation and humour which was habitual to him was replaced by a most pitiful expression of weariness; for his wife, with the uncompromising accuracy for which her portraiture was remarkable, had caught the mood of the moment and – much to his subsequent amusement – reproduced unerringly the profound boredom which he was experiencing while having to sit to her! [5]

This remark does not really accord with the image, however, the sitter’s expression suggesting anxiety rather than ennui.

The precise brushwork and glowing colour notes relate the portrait to the late Pre-Raphaelite and Aesthetic movements within which both Evelyn De Morgan’s paintings and her husband’s craft work are historically placed. The couple married in 1887, having met through mutual friends in art and design including Evelyn’s uncle, painter J.R. Spencer-Stanhope. For many years, her earnings subsidized his pottery and when ceramic work had to be given up in 1903–4, she encouraged his writing. A visitor recorded how both were ‘working from dawn to dusk – he writing, she painting glorious pictures. The novels don’t get published and the pictures don’t get exhibited; but both author and artist seem supremely happy!’ [6] When the first novel proved a bestseller, Evelyn was proud and grateful, feeling now enabled to paint without exhibition and sales. The present work is therefore a tribute to her husband’s dual talents, and in part also a farewell to their home in Chelsea, which had to be vacated in September 1909. It must have been completed sometime earlier, before the artist fell and injured her right arm, which prevented painting for several months.

According to the artist’s sister and biographer, when in the same season it was decided to issue It Can Never Happen Again in two volumes, publisher William Heinemann chose to include frontispiece portraits of the author in each volume, proposing to use that of 1893 in the first, and the present recently completed image in the second. Neither sitter nor artist were in accord. De Morgan wrote:

The portraits are not my property, but my wife’s. My personal identity (as far as I retain the copyright) is at the disposal of any arrangement you and she are agreed about … but to you I feel bound to remark that two portraits in one work savours a little of egotism, and will make a poor bloke (when he’s me) feel ridiculous. [7]

Evelyn was even more emphatic, writing:

Both my husband and myself agree that what with the volumes in the background, and the pot in the foreground, to say nothing of inkpots, etc, it is far too bumptious a thing to be tolerated and too self-advertising to be allowed outside the family circle; so the idea must be given up. [8]

As a result, only the earlier portrait was reproduced. The present portrait was first exhibited at a retrospective exhibition of Evelyn De Morgan’s work held in 1919.

In her will dated 27 February 1917, the artist bequeathed ‘to the National Portrait Gallery the portrait painted by me of my late husband William de Morgan holding a lustre pot in his hands but if from any cause whatever they shall refuse to accept this bequest then I bequeath the said portrait to my said brother Percival Spencer Umfreville Pickering with the desire that he will keep the same in his family but this expression of my desire shall not be so construed as to constitute the said gift an heirloom’. [9] Accordingly, Spencer Pickering informed the NPG of the bequest (9 May 1919); told of the Gallery’s ten-year rule, he wrote, ‘I see no object in submitting the portrait to your committee at present, except on the chance of their declining it on the score of lack of artistic merit: a contingency which I will not contemplate’. [10] On 25 June 1919, the Trustees decided that the rule should not be waived.

The portrait was then placed on loan to Leighton House. In 1927, after Spencer Pickering’s death in 1920, Wilhelmina Stirling reminded the director of the NPG of their sister’s bequest, as if refused by the Gallery, the work would become her property. She added that she believed the NPG had ‘in the interval purchased one small sketch of [De Morgan] which I wish to point out, in confidence, is considered by all his relations to be entirely unlike the original’ (this was James Kerr-Lawson’s drawing NPG 2116) and concluded, ‘it seems unfortunate that such a misrepresentation should be the sole portrait of him to go down to posterity in the National Portrait Gallery, especially as he is now acknowledged to be one of the greatest ceramic artists – if not the greatest, as many think – that England has produced, as well as one of her foremost novelists’. [11] But when the painting was brought for inspection on 23 June 1927, the Trustees decided that the subject ‘was sufficiently represented’ by Kerr-Lawson’s drawing, and the bequest was declined. [12] Mrs Stirling was dismayed (see NPG 2116) but an apparent offer to replace the drawing with NPG 6358 was also declined. From 1931 the present work was held at Mrs Stirling’s home, Old Battersea House, until her death in 1965 when it passed to the De Morgan Foundation, whose Trustees placed it on loan to Cardiff Castle before approaching the NPG with a renewed offer in March 1996. This was ‘enthusiastically’ received, the portrait now being regarded as ‘of exceptional interest and importance’ and ‘unquestionably the most important and attractive’ image of the sitter. It was formally accepted on 16 May 1996 and accessioned in April 1997, following its exhibition at the Russell-Cotes Gallery, Bournemouth. [13]