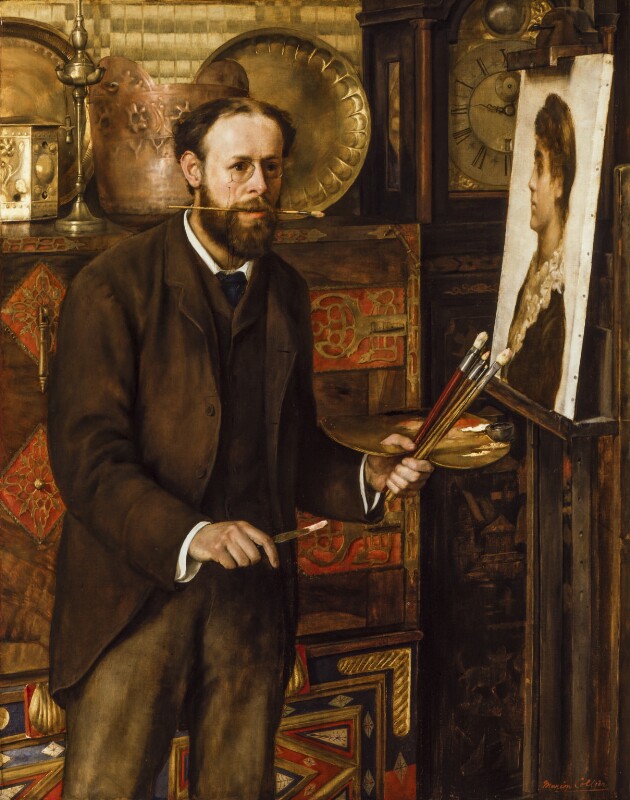 This large and accomplished portrait was painted during 1882–3 at 7 Chelsea Embankment, the home of sitter and artist following their marriage in June 1879. It depicts the sitter in energetic painting mode, against a background of antique furniture and brassware.[1] On the easel is a small profile portrait of the artist similar in format to NPG 6032 but in reverse pose. She, however, is not reciprocally shown at work but as a fashionably dressed young woman, a contrast that confirms contemporary gender notions of active/male and passive/female.

The artist’s choice of a pose in which the sitter appears momentarily arrested in his task reflects her training at the Slade, where life models sat each afternoon in poses set every half-hour by the students in turn.

In 1882–3 John Collier was in his early thirties, already well established as a portrait painter, especially of eminent lawyers and scientists; recent sitters included Joseph Hooker (RA 1881 [349]) and Charles Darwin (RA 1882 [1465]). From its inception he also exhibited at the Grosvenor Gallery, with mainly female portraits, including a full-length study of his wife (Grosvenor G., 1880 [81]) and one of Laura Alma-Tadema (Grosvenor G., 1881 [11]). In 1882 he exhibited NPG 6032, which was probably in progress when the present work was begun, although by autumn 1882 he would have been engaged on works for the 1883 exhibition season, which included portraits of the vicar of Kensington and his father-in-law Thomas Henry Huxley (RA 1883 [304] and [334]), a historical genre scene of Egyptian dancers entitled Pharoah’s Handmaidens (Grosvenor G., 1883 [151]) and a triptych portrait of his wife with two sisters (Grosvenor G., 1883 [164] as Three Sisters). [2]

Marion Collier was the third child of naturalist T.H. Huxley, one of the most famous and controversial figures of his age. She has been described as her father’s ‘gifted heir’, [3] and from around 1874 studied at the Slade School, latterly under Alphonse Legros, whose rigorous training in figure drawing laid the foundation of many careers. The National Portrait Gallery collection includes several of her portrait sketches from the late 1870s, of her father and his contemporaries (Darwin, Sir Richard Burton and historian E.H. Lecky). Her exhibiting career began in 1880 and in the next few years she had works at the RA, Grosvenor, British Institution, RBA, Royal Institute of Painters in Watercolour, and Dudley Gallery, as well as sending to Manchester, Liverpool and Glasgow.

Her earliest exhibited works were imaginative subjects: A Bacchante (Grosvenor G., 1880 [185]) and The Sins of the Fathers (RA 1880 [1453]). In five years she had seven works at the Grosvenor, and in 1883 her exhibit for the coming season was announced in the following terms: ‘Mr John Collier [will be represented] by a “Professor Huxley” and a picture of Nubian Dancing Girls; Mrs John Collier by a portrait of her husband at his easel.’ [4] In the event, this work, shown under the title An Artist at Work (143), was one of Marion’s two exhibits (the other [52], probably a landscape or gardenscape, was entitled Late May).

Although not mentioned by all critics, the portrait received favourable and judicious attention in the press, often in association with the sitter’s own exhibits:

Mrs Collier has not only been painted by her husband [in Three Sisters] but has painted him and has produced a strong and most life-like portrait, under the title of ‘An Artist at Work’, where the painter is represented in his studio – his eyes intently fixed upon his subject – one of the three ‘Sisters’ – whose features he is evidently getting by heart. We could have wished, however, that the background had been simpler. [5]

Mrs J. Collier’s ‘An Artist at work’, too, although it wants subordination and keeping, is full of vitality and thoroughly unconventional in treatment. [6]

... the nakedness of Mr Collier’s ‘Pharoah’s Handmaidens’ is wholly unredeemed. [7] It is a pity that Mr Collier should attempt subjects of this kind, seeing how capable an artist he is when he deals with facts which he sees. In portraits he is always unaffected, and the ‘Three Sisters’ (164) is an admirable example of his best work. Honest, faithful and accomplished is also his wife’s portrait of him (143). [8]

The Magazine of Art first noted the work briefly: ‘Mr Collier’s “Three Sisters” has great merit – in colour, characterisation, handling and effect; and so, in a way of its own, has Mrs Collier’s “An Artist at Work”.’ [9] The journal then returned with a more extensive assessment, which also alludes to audience reactions in the Gallery:

In ‘An Artist at Work’ Mrs John Collier has painted an admirable portrait of her husband, the artist of ‘Pharoah’s Handmaidens’ and the ‘Three Sisters’, both in the Grosvenor Gallery, where they command attention … Admirable in many ways as it is, even the most friendly critic must admit that the ‘Artist at Work’ is calculated to provoke the humour of the frivolous. Irreverent remarks, indeed, have not been wanting; and a plausible first impression is that Mr Collier, looking up suddenly from his canvas, is intensely astonished to see his sitter melting away into thin air. This idea once conquered, it becomes clear that the work is very clever and original. The aspect and gesture of the subject have been not only caught but fixed, and that with spirit. Some may think, not without justice, that glance and movement are fixed somewhat too manifestly; but it should be remembered that both are exceptionally difficult and unusual. It is one thing to paint a portrait of some one who poses for the purpose more or less conventionally; it is quite another thing to seize the likeness, the attitude and the expression, of an artist, in his habit as he works. This is what Mrs Collier has done, and she has done it extremely well. There is much to be said, too, for the technical merits of her work. The handling is solid and accomplished; and it is notable that with a ‘noisy’ and impertinent background of bric-à-brac, treated with conscientious realism, the relative values have been maintained. Head and face stand out well from their surroundings; and better painted brushes we do not remember to have seen. [10]

Accompanying this thoughtful review was a large engraving of the painting. [11]

Following the artist’s untimely death, the work was loaned by the sitter together with eight other works for display in the Victorian Era Exhibition to mark the Queen’s Diamond Jubilee in 1897. It is seen in an installation photograph included in the catalogue of the Woman’s Work Section and prompted one critic to remarks that ‘Mrs John Collier’s work is always conscientious, full of pains and possesses a bold freshness all its own.’ [12] The portrait then remained in Collier family possession until purchased by the NPG.

According to the sitter’s grandson, ‘in a look back to the seventeenth century [the portrait] uses two devices popular with baroque artists’, one being a reference to a figure or figures outside the work and the other the seizing of a fleeting but crucial moment as ‘John Collier pauses to decide exactly how he is to complete the portrait on which he is working’. [13]

Almost three-quarter-length, looking to right, standing in studio holding palette knife, brushes (one in mouth) and palette beside easel with portrait of the artist.

The sitter to 1934, his son Sir Laurence Collier to 1976, his son William Collier (sitter’s grandson), from whom purchased 2007 with assistance from the Art Fund.