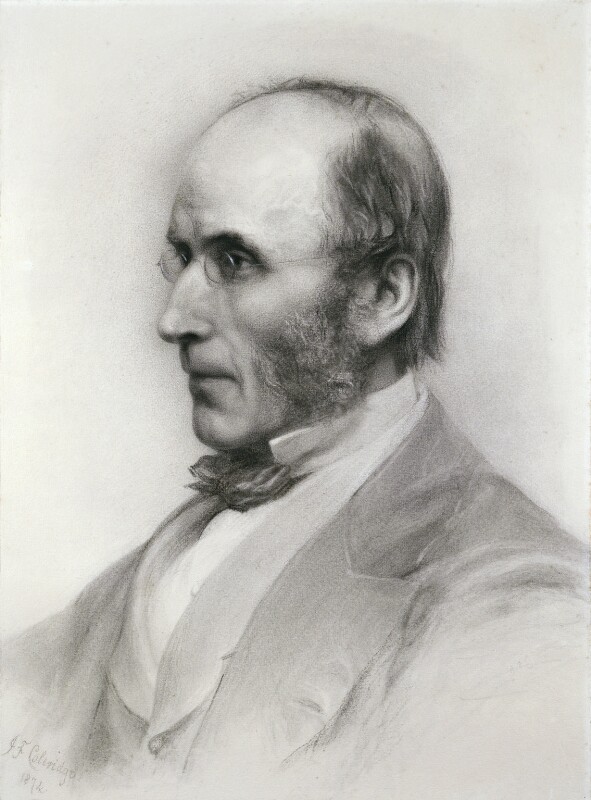 As an artist, Lady Coleridge is perhaps best known for her portrait drawings of the 1870s, including three of John Henry Newman, two of which were shown at the Royal Academy in 1875 and 1877 to critical acclaim. [1] The chalk technique and format of the Newman portraits are similar to those of her drawings of her husband, John Duke Coleridge (one exh. RA 1873 (1315)), and William Butterfield (exh. RA 1874 (1245)). Successful prints were made after one of the Newman drawings by Samuel Cousins (mezzotint, 1880); [2] and that of J.D. Coleridge by Charles Holl (stipple, see NPG D20763) respectively. It was perhaps Butterfield’s extreme reticence that prevented prints being made after her drawing(s) of him in 1874. Certainly there would have been a demand as his portraiture is negligible. [3]

In 1900/1 another drawing of Butterfield by Jane Coleridge, identical to NPG 6792, was presented to Keble College, Oxford, where Butterfield worked between 1868 and 1886 (see ‘All known portraits, 1874’). The drawings, which copy a carte-de-visite by Elliott & Fry, are astonishingly alike, with only minute variations (a difference in the left eyeball and freer handling of costume in the NPG drawing, which is also fractionally larger). One of them was that exhibited at the RA in 1874 (see above). They are life-size.

J.D. Coleridge was a High Church tory who became acquainted with Butterfield when he first worked for the family at their church at Ottery St Mary, Devon, in the early 1850s. [4] He commissioned the remodelling of the Chanter’s House (formerly Heath’s Court) at Ottery from Butterfield in 1880–83. The magnificent new library incorporated a small recess to house an effigy of Lady Coleridge by Frederick Thrupp (1879). Jane Coleridge’s drawings of Coleridge, Newman, Butterfield and William Boxall were locally framed by J.H. Elliott of Ottery St Mary, and hung in the entrance hall. [5]

1) In 1846 Jane Fortescue Coleridge, née Seymour, amateur artist, daughter of the Revd George Turner Seymour of Farringford Hill, Isle of Wight, became the first wife of Butterfield’s friend John Duke Coleridge (created Baron Coleridge of Ottery St Mary, 1873), lawyer; she died 6 Feb. 1878. Her early talent is apparent in a half-length oils self-portrait aged 17 (Sotheby’s, The Chanter’s House sale, 24 Oct. 2006 (19)). She exhibited at the RA between 1864 and 1878.
2) ‘I think I did mention to you the great wish my dear wife had that her head of you might be perpetuated by Cousins the engraver.’ Letter from J.D. Coleridge to J.H. Newman, 19 Nov. 1880; quoted Coleridge 1904, vol.2, p.297.
3) Foister 1990, no.135. It is suggested that Jane Coleridge based one of her Newman drawings on a carte-de-visite photograph by R.W. Thrupp of Birmingham.
4) ‘Architects and contractors are an unstable lot of fellows in general, though I have been spoiled by old Butterfield, who kept his time to an hour, never exceeded his estimates by a shilling, and whose work, some of which I have known for forty years, seems as if it would last for ages.’ Letter from J.D. Coleridge to Lord Justice Lindley, Apr. 1894; quoted Coleridge 1904, vol.2, p.297.
5) See photograph, Chanter’s House sale catalogue, Sotheby’s, 24 Oct. 2006, p.221: the frames for the drawings of Boxall and Butterfield seem to match.