1 of 30 portraits of Alphonse Legros 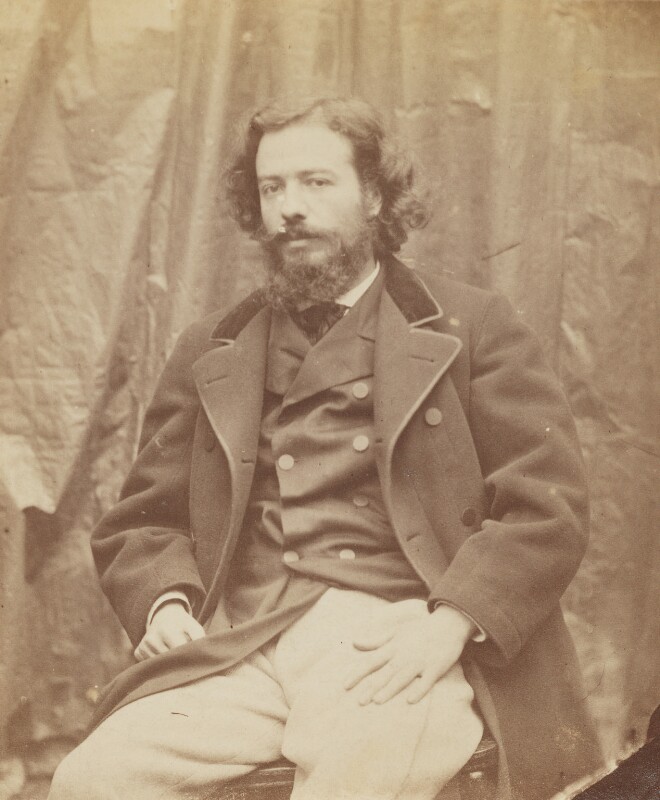 This portrait of Legros was made by Lewis Carroll (Charles Lutwidge Dodgson) at the house of Dante Gabriel Rossetti and his family during an extended photographic session in the autumn of 1863. The idea for the session seems to have come from Dodgson rather than Rossetti. The two were introduced on 30 September 1863, when Rossetti reported to his mother: ‘The photographer (Revd. Mr. Dodgson) is coming here on Wednesday to do the lot of us, – this day week.’[1] Dodgson’s diary for the same period records that the artist was ‘most hospitable in the offer of the use of the house and garden for picture-taking, and I arranged to take my camera there on Monday [5 October], have Tuesday for friends, and on Wednesday take him and his mother and sister.’[2] The address was 16 Cheyne Walk, Chelsea, and the project occupied five days, 4–9 October. Legros, C.B. Cayley (Christina Rossetti’s suitor), Alexander Munro and his wife Mary were the friends photographed on 6 October. The Frenchman’s inclusion in the close-knit group is rather surprising and could have been chance, to judge from Dodgson’s diary entry: ‘Mr Rossetti [sat] for one [photograph], and also two friends of his who came in, a Mr. Cayley and a Mr. Le Gros, an artist.’ Legros, who had arrived in England only a few months earlier, was admired by initiates such as Rossetti but was scarcely well known, and apparently not known to Dodgson.[3]

Dodgson was slow to deliver the prints, and two months later Rossetti was still chasing him, on 3 December writing, ‘If you take good photographs of people, you know you cannot help them wanting to see them. So I come boring you about those you took here. Everyone concerned has reached such a pitch of excitement about them that I am compelled to turn their spokesman a penman.’[4] The photographs were eventually delivered the following March, and were well received by Rossetti. He ordered copies of a number of them and reported to Dodgson that ‘Legros (who is away) & Cayley have not yet seen theirs.’ In an undated letter to the photographer, Christina Rossetti ordered her copies and requested one of Legros.[5] Legros’s opinion of the portrait photograph is not recorded.

Until the purchase of the Rossetti Album (P1273) the only known copy of this print was in the Carroll album, ‘Photographs Vol.III’ (873), Gernsheim Collection, Harry Ransom Humanities Research Centre, University of Texas at Austin. The Gernsheim print is fractionally smaller, has an arched top, is signed by Legros and dated ‘1863’.[6] There was a single pose and Dodgson’s negative number was 1128.

The Rossetti Album was offered for sale to the National Portrait Gallery by the antiquarian booksellers Ian Hodgkins & Co. Ltd. It bears William Michael Rossetti’s label, ‘24: Gabriel, Family, Miscellaneous’, and is inscribed on the flyleaf ‘W.M. Rossetti / 1898’. The album contains a mixture of mostly albumen prints, by various photographers, of the Rossetti family and friends, and of art works. Six of the photographs are by Dodgson, taken at the session in Cheyne Walk in October 1863.

Reproductions of other prints of the image
Gernsheim 1969, pl.22.