6 of 29 portraits of Dante Gabriel Rossetti 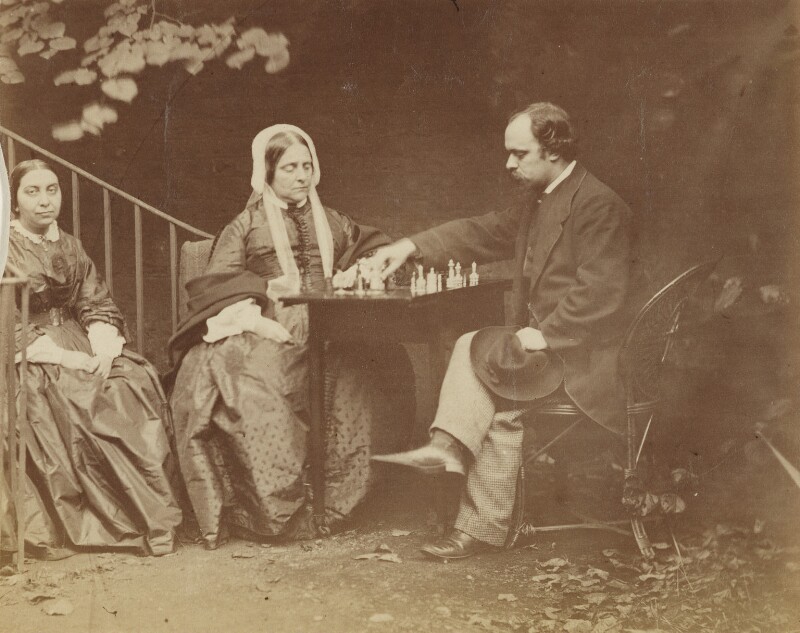 For a description of the occasion of this work, see NPG P29. It shows Rossetti playing chess with his mother Frances, and his elder sister Maria seated alongside. It is a physically cropped version of the family group indexed as IN1134 in Taylor & Wakeling 2002; the original image includes the figure of Rossetti’s younger sister Christina seated far left and the ragged left edge of the present print indicates how the cut was made. The full-frame image is reproduced in Cohen 1998, p.12.

Dodgson also produced a vignette image isolating Rossetti and his mother in a horizontal oval; the print remained in the Rossetti family until 1963 and was published in 1993. [1]

When compiling his account of portraits of Dante Gabriel Rossetti, William Michael Rossetti appears to have had access to the vignette only. He wrote:

One of the photographs represents Rossetti playing at chess with our mother: he is in the act of moving the white rook. This group, vignetted from a larger one, gives one of the few extant profile views. It is a true likeness, but the downward eyelids, and want of definition in the lower part of the face, reduce its value as a record. It was engraved as a woodcut in The Graphic shortly after my brother’s death.[2]

Only two complete images are found among Dodgson’s extant prints. [3] Two images of Christina from the same photograph also exist (one vignette, one cut), [4] together with the vignette mentioned above and the present incomplete print.

The work is notable as one of very few images of Maria Francesca Rossetti, who was a language teacher and religious instructor, published a guide to Dante’s Divine Comedy in 1874 and in the same year formally joined the Anglican sisterhood at All Saints’, Central London. Her considerable talents were outshone by those of Christina and Dante Gabriel, to whom she remained an admired elder sister.

The print is from a Rossetti album offered for sale to the National Portrait Gallery by the antiquarian booksellers Ian Hodgkins & Co. Ltd. The album bears W.M. Rossetti’s label ‘24: Gabriel, Family, Miscellaneous’ and is inscribed on the fly-leaf ‘W.M. Rossetti / 1898’. The album contains a selection of mostly albumen prints, by various photographers, six being those taken by Dodgson in October 1863; see also NPG P1273(25b).