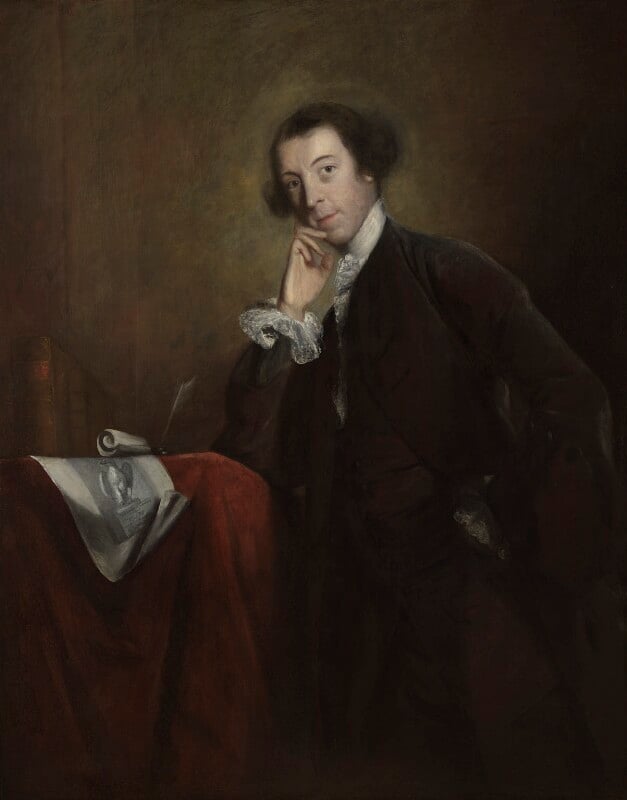 'Mr Walpole's picture ... from which there is a mezzotinto print in 1757, by MacArdal, standing in a pensive posture by a table, on which is his fine antique eagle in a print, is very like him’, commented the Rev William Cole in 1765, ‘except that it is a little too plump for him'. [1] He is portrayed as a writer with his quill (he was already known as a copious correspondent) and as a collector with one of the engravings by Charles Grignion senior [2] of the Roman eagle from the Boccapaduli Palace which he had acquired in Rome in 1745. [3]
NPG 6520 is one of three autograph versions of the Reynolds portrait, all painted, apparently, in 1756-57; there is no sitter-book for 1756, and in 1757 a single appointment for Walpole on 30 August need not imply a sitting. The other versions are in the Art Gallery of Ontario, Toronto, [4] descended from Charles Churchill, the sitter's brother-in-law, and at Ragley, [5] descended from Francis Seymour Conway, later 1st Marquess of Hertford, Walpole's first cousin. The Toronto portrait was delivered to Churchill in January 1757 [6] and differs from the other two in that the print of the eagle is seen upside down (i.e. so that Walpole could appreciate it, but not the spectator) and without an inscription. The Ragley version is signed J. Reynolds pinxit 1757. On 9 November 1757 Walpole asked Grosvenor Bedford, his recently appointed deputy at the Exchequer and the first owner of NPG 6520, to retrieve 'my picture' from the engraver McArdell (who had been publicising what had been commissioned by Walpole as a private plate); [7] McArdell's plate is dated 1757 and, since it shows the eagle right way up, was taken from either NPG 6520 or the Ragley version. Late in January 1758 Reynolds noted in his pocket book 'Send home Mr Walpole' and again on 1 February 'Send [bill?] to Mr Walpole', the latter doubtless referring to the signed receipt, dated 1 February 1758, now preserved in the Lewis Walpole Library, Farmington: 'Received of the Honble Horatio Walpole Esq. the sum of forty-eight guineas for two half-length portraits of himself being in full of demands by me'.
There has been much discussion as to which of the three is the prime version. In 1857 Cotton listed NPG 6520; in 1865 Leslie & Taylor, unaware of the Toronto version, stated that 'Lord Hertford had the original, and the Marquess of Lansdowne the duplicate [NPG 6520]'; [8] in 1941 Waterhouse allowed 'there is much confusion over the Walpole portraits', and chose to list NPG 6520; in 1973 he illustrated the Ragley version; [9] in 1970 Lewis and Adams considered the Toronto version as 'doubtless' the first; in 1986 Penny considered the Toronto version the first, Ragley the second, and NPG 6520 an early copy, probably by Reynolds. The condition of the three portraits has always complicated their evaluation, but the cleaning of NPG 6520 in 1998, when the finely painted head and minor pentimenti were revealed, led both Mannings and Penny [10] to accept it as autograph, while Mannings, who had never doubted its quality, considered it 'probably the first version of the design ... repeated in the Toronto and Ragley versions'.
A copy of NPG 6520 by C. M. Newton was given in 1888 to King's College, Cambridge. [11]

Painted for Grosvenor Bedford (1708-71)1 and sold by his descendants after 1847 (when the picture was declined by Robert Peel)2 and before 1857 to the 3rd Marquess of Lansdowne (d. 1863);3 by descent to the 8th Marquess who gave it to his son, the Earl of Shelburne; sold by the Trustees of the Bowood Settlement and bought with the aid of the Heritage Lottery Fund, the National Art Collections Fund and the Dame Helen Gardner Bequest, 2000.