18 of 3152 portraits matching these criteria: 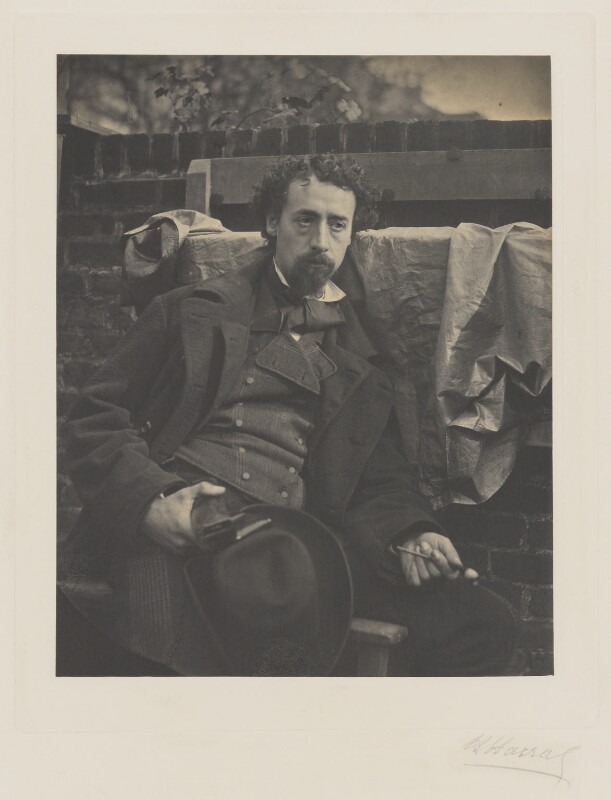 Horace Harral was a prominent London engraver who specialized in wood-engraving; he also exhibited etchings at the Royal Academy during the 1860s, and experimented with photography. [1] He was apprenticed as a wood-engraver in the late 1830s to the engraver John Orrin Smith (Orrinsmith), cutting the blocks, some years before Keene began his engraving apprenticeship, though for Keene it was as a draughtsman on woodblocks for Whymper Bros. In the 1850s Harral and Keene were part of the teams of artists, draughtsmen and wood-engravers engaged in the production of images for the Illustrated London News. In the mid- to late 1860s they collaborated specifically, drawing and cutting designs for books and notably the magazine London Society (see Keene’s drawings for this, BM, London). Harral’s photograph of Keene was probably taken at this period.

The memoirs of the publisher Henry Vizetelly describe ‘Horace Harral, one of the cleverest of Orrin Smith’s pupils whom I had become rather intimate with’ and a Derbyshire sketching tour they made in 1840.[2] Henry Stacy Marks wrote an (undated) account of visits to the painter Edwin Edwards at Southwold, where Keene and Harral were staying. [3] There is a rough sketch by Keene of Edwin Edwards and Horace Harral (Tate, N04372) which includes an unrecognized Keene self-portrait, back view, wearing a ‘Scotch cap’.[4] See also Keene’s Clipstone Street sketchbook for a sketch of Harral (V&A, London, E2376-1932, p.9). Keene was still writing to Harral in Felixstowe in the late 1880s and Layard used the correspondence to record Keene’s last years. [5]

NPG P861 is one of Harral’s remarkable portraits of the London engraving community in the 1860s. The prints are distinguished by a sense of informality between photographer and subject, unusual compositions, bold scale and some use of fancy dress.[6] Keene, however, posed in his usual shabby day clothes, trousers trimmed with stripes of checked cloth, perched on a garden bench, pipe in one hand and tobacco pouch and hat in the other.[7] A length of light-coloured material on the wall behind him reflects the artificial lighting and illuminates his features. There is some retouching of the eyeballs but no disguising the mournful expression. Perhaps he felt under pressure – an inscription on the back of the mount of a variant print notes: ‘Keene objected to being photographed & this is said to be one of 3 copies of the only photograph he is reputed to have sat for’.[8] Certainly he seems to have paid only one visit to a professional photographer – Elliott & Fry in the 1870s – and that no doubt partly because the studio was below his rooms at 55 Baker Street. Harral’s photograph of Keene is also remarkable as an1860s image printed in a later, 1870s process: the platinum print was a technique not used until 1873. [9] It was first published after Keene’s death in Layard’s 1892 biography.

The photograph was given to the National Portrait Gallery by John A. Hipkins in June 1927, and transferred from the Photographs Collection to the Primary Collection in 2000. [10]

Three-quarter-length to right, seated on bench against brick wall, holding hat and pouch in his right hand and pipe in left, wearing a thick overcoat.

Reproductions of other prints of this image
Layard 1892, facing p.175 (oval photogravure by Imprimerie Lemercier after Harral).