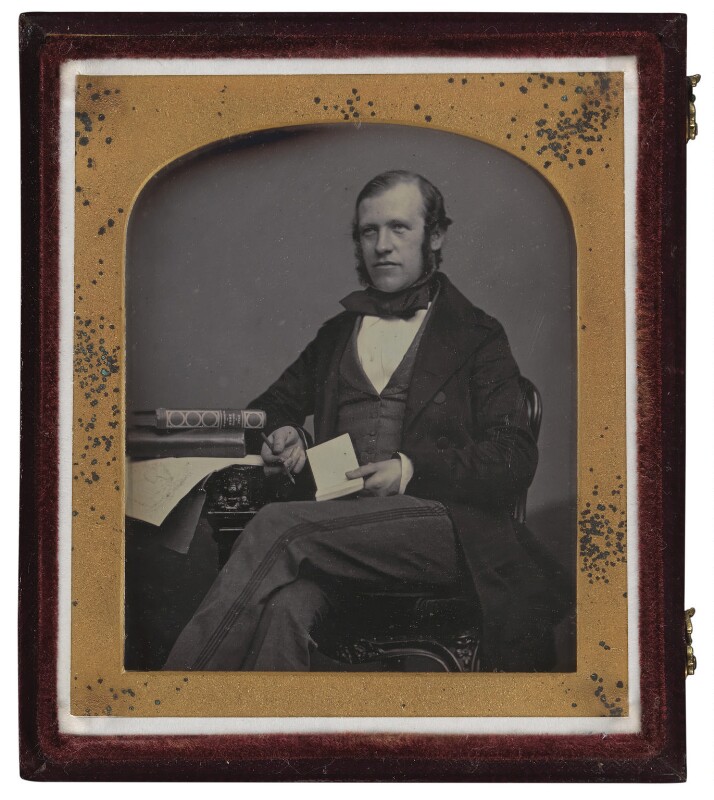 The date c.1847 attributed to NPG P859 is based on the prominence in the photograph of a copy of Lord Macaulay’s Lays of Ancient Rome, at Scharf’s right hand. The seventh (and first illustrated) edition was published by Longman’s in 1847 ‘with illustrations, original and from the antique, drawn on wood by G. Scharf, jun.’ The success of this publication brought George Scharf the younger’s name to a wider public. [1]

Scharf was actually abroad between October 1845 and October 1847. [2] It seems that soon after his return, flush with confidence from the Lays, he arranged to be photographed at one of the best studios in London – rather as when visiting Paris in 1867 he made a point of sitting to Nadar (see ‘All known portraits’). The Kilburn daguerreotype is the first known photograph of Scharf and one of the most flattering portraits in the iconography.

Photographs form the bulk of his portraiture. He was evidently not camera-shy but nor did he display any particular appreciation for the medium. He probably regarded it as a useful tool; at various times photographers were employed by the National Portrait Gallery. However, it is remarkable that during his directorship photographs were not acquired for the Collection even though it was an intensely busy period for photographic portraiture. [3]

William Edward Kilburn opened a studio in Regent Street in 1845 and for the next twenty years was one of the leading West End photographers, self-styling himself after a few royal commissions ‘Her Majesty’s Daguerrotypist’. [4]

The daguerreotype was acquired from Scharf’s estate at an unknown date. Initially part of the Photographic Collection (x15421) it was transferred to the Primary Collection in November 2000 and renumbered P859. [5]

Three-quarter-length, seated to left, head three-quarters to left, sketchbook in left hand and pencil in right, two books and a map on table at left.

Transferred to the Primary Collection from the Photographic Collection, November 2000.