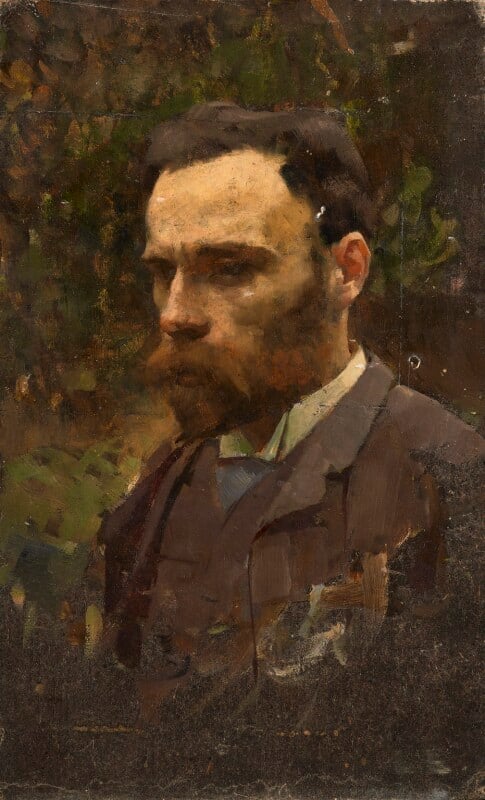 This sketched head of John William Waterhouse remained with the sitter’s family until it was sold in May 2011. The sitter’s identity was not in doubt; and it was regarded as a self-portrait.[1] In 2002 Peter Trippi, the leading authority on Waterhouse, questioned the attribution. He suggested that the sketch was not a self-portrait but painted by William Logsdail, Waterhouse’s neighbour at Primrose Hill Studios. Trippi had noticed that it shared similarities with a series of other portrait sketches dated c.1886–7, preparatory to Logsdail’s great cityscape, The Bank and Royal Exchange (exh. RA 1887; coll. Mr W. Gredley).[2] He noted that the head of Waterhouse, with its downcast and inscrutable expression, could be identified with the man in the brown suit and top hat in the group on the Bank omnibus in Logsdail’s finished painting.

The Bank and Royal Exchange is well documented and Logsdail recorded in 1917 that he used friends and colleagues from Primrose Hill Studios – including four members of the Waterhouse family – to act as models for parts of the painting.[3] There was a further twist to the collaboration, as the group on the omnibus also includes an image of Logsdail – not a self-portrait, but painted by Waterhouse (see ‘William Logsdail, All known portraits, By other artists, exh. 1877’).

Primrose Hill Studios, built in 1877, was a development of twelve artist houses around a quadrangle in a mews off Regent’s Park. In 1887 J.W. Waterhouse moved from No.3 (which he had leased since 1878) to No.6 and Logsdail was at No.4; Logsdail later recalled that the artists around the courtyard ‘formed a happy family, in and out of each others [sic] studios during the day, and in the evening swapping stories over the cards and whisky or dining at “the Bull and Bush” on Hampstead Heath’.[4] For more details on this artist community, see the caricature drawing of the Primrose Hill School, NPG 4405.

Waterhouse’s features were regular, half-hidden under a thick reddish-brown moustache and beard. NPG 6920 is uninscribed, and the bare-headed man depicted relates only subtly to the top-hatted one in the finished painting of The Bank and Royal Exchange, so it is fortunate that the sketch remained in the Waterhouse/Logsdail circle, or its history and identity might have been lost.

Trippi also looked at the use of paint in the sketch. It was applied with square-tipped brushes and a palette knife, obtaining a blocky build-up in keeping with continental techniques.[5] This supported the attribution of the sketch to Logsdail, who had attended art school in Antwerp in 1878, whereas there is no evidence that Waterhouse worked in continental studios.

Logsdail made his name at the Royal Academy in the 1880s through large, highly detailed and realistic London street scenes. He did not turn to full-time portraiture until after 1907, although NPG 6920 shows his ability in that field.

The portrait was sent to auction by John Physick, Waterhouse’s great-nephew, at the Canterbury Auction Galleries, 24 May 2011 (260). It was catalogued as a self-portrait by Waterhouse and given a low estimate. It is painted on board, possibly a reused sketchbook cover, and is thickly varnished.[6] In Trippi’s words this head is ‘absolutely a modern-life image made by a trusted colleague/friend’;[7] with the added value, from the National Portrait Gallery’s point of view, of being the only known painted head of Waterhouse, and the first example of Logsdail’s work to enter the Collection. The attribution to Logsdail has been established beyond doubt.

The artist; by family descent to John Physick; Canterbury Auction Galleries, Canterbury, 24 May 2011 (260, as a self-portrait), purchased by Hazlitt, Gooden & Fox Ltd on behalf of the Trustees.