2 of 2 portraits of Alfred William Rich 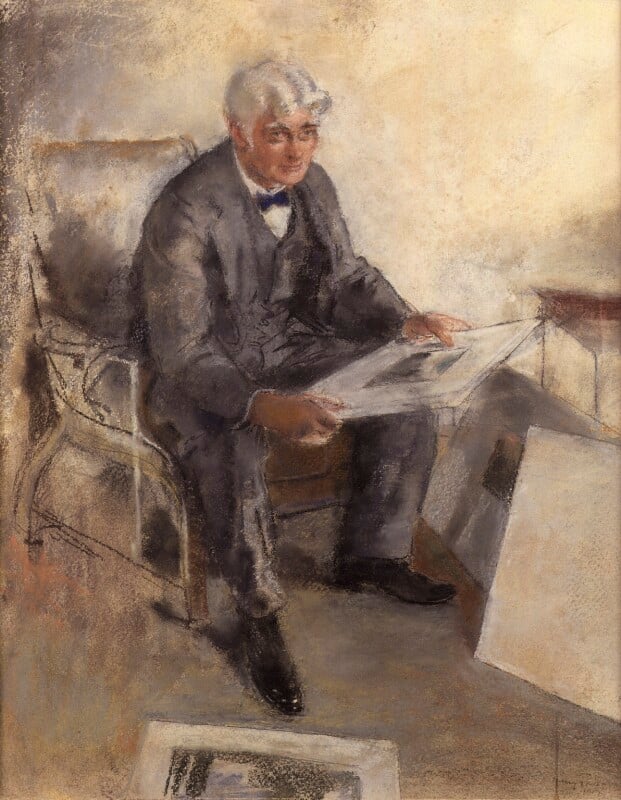 Alfred Rich went to the Slade late, in his thirties, at a time when Henry Tonks, his junior by six years, was assistant professor. They later crossed paths as fellow members of the New English Art Club, and both were serving on the NEAC’s Selecting Jury in 1904 and 1909 (see NPG 2566 and ‘All known portraits, Photographs, 1904’).

During the First World War Tonks continued to teach part-time at the Slade. He had actually trained in medicine, and practised in the 1880s, so was well-qualified for his wartime work. In 1916–17 he was attached to the Cambridge Hospital, Aldershot, recording the features of wounded soldiers before and after maxillo-facial surgery (drawings coll. Royal College of Surgeons). These remarkable works were executed in pastel, similar in technique and scale to his portrait of Alfred Rich, NPG 4200, which dates to the same period. From around 1913 pastels were Tonks’s favoured medium: ‘they are so fragile, on the other hand they are very rapid for notes and certainly truer than watercolour’. [1] Also comparable to NPG 4200 is his portrait of Auguste Rodin (1914), another large pastel of a whole-length seated figure (Tate, N03017).

In NPG 4200 the artist is shown surrounded by drawings; he is aged 60, a respected, conservative landscapist, exhibitor and teacher. [2] Large in scale, it is an essentially informal image. Rich had also been the model for William Orpen’s The Sketcher (see ‘All known portraits, exh. 1910’): that portrait was also the product of an artist friendship. Rich’s iconography is in fact extremely small: his clean-shaven, square features and white hair can be identified in a few group portraits; a familiar figure among peers and pupils but not to the outside world, he does not have a clear public image.

The framed pastel was left to the National Portrait Gallery in the will of Dr Dorothy L.C. Day, of Addiscombe Road, Croydon. Its previous history is unknown.

1) Quoted Chambers 2002, p.14 n43.
2) ‘Mr A.W. Rich […] is perhaps the most scholarly of all living exponents of water-colour painting, his work showing a thorough knowledge of the tradition of the old English school combined with a modern directness of technique’; review of Watercolour-Painting in Connoisseur, vol.50, 1918, p.57.

Whole-length, in grey suit and blue bow tie, seated to right, holding a drawing in both hands.