7 of 18 portraits by Frank Holl 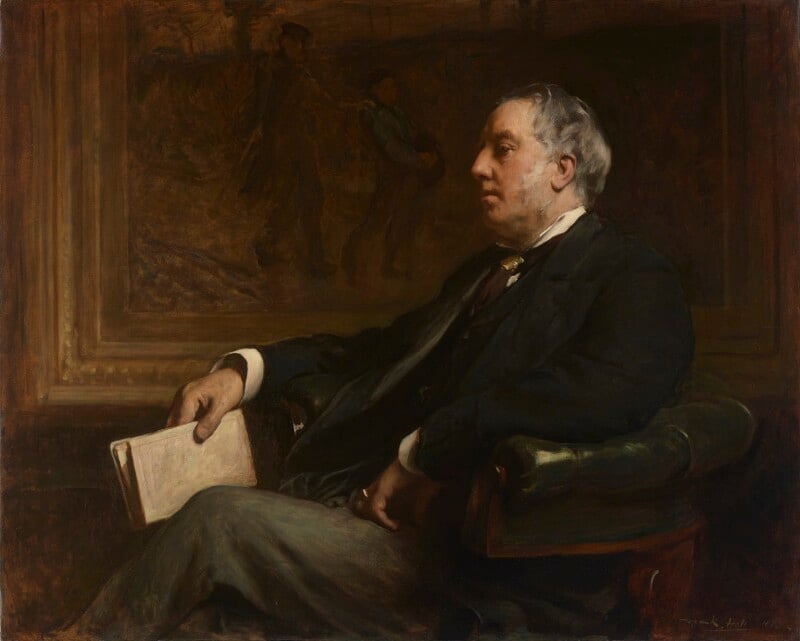 An exceptionally able and ambitious businessman with the family firm of art dealers and co-proprietor of Punch, Agnew was also a Liberal MP in the 1880s. A key figure in the late Victorian art world, he assisted important collectors like Lord Iveagh and Henry Tate, while helping promote many artists’ careers, his personal charm enabling him to maintain good relations with all concerned. He is shown seated in an upholstered arm chair, the light coming from the right to give a soft profile view that minimises Agnew’s otherwise prominent jowls; his tie is fastened with an elaborate silver clasp seen also in photographs, and he holds a slim vellum-covered book, his finger marking the place as if he has fallen into a reverie whilst reading.

The larger and more important of the two portraits of Agnew by Frank Holl, this is a sympathetic depiction, placing the sitter in front of a large work by Fred Walker, who was one of Agnew’s favoured protégés. Entitled The Wayfarers, it depicts a blinded veteran being led by a boy through a damp twilight landscape and was exhibited first in 1866 at the Gambart gallery and then in 1876 at the Walker memorial exhibition; in engraved form it forcibly impressed the young Van Gogh; and remained in Agnew family possession until 2012.

Agnew & Holl were closely connected from 1881, when the Agnew firm published an admired print of Holl’s 1879 portrait of engraver Samuel Cousins [1] and it would appear that William Agnew supported Holl’s mid-career move from social realism subjects into portraiture. In 1883, during the same season as the present work, Agnew commissioned from Holl a portrait of John Tenniel, Punch’s chief cartoonist [2] and later helped arrange a prestigious commission for Holl to paint John Poyntz Spencer, 5th Earl Spencer 1888 [3].

According to Holl’s daughter and biographer Ada Reynolds, Agnew was

one of my father’s dearest friends and staunchest admirers. A good friend he was indeed, for many many years and one to whom my father was greatly indebted during the earlier days of his career; one to whom his premature death came as a real blow with a sense of personal bereavement. [4]

The present work appears to have been a personal commission, although it may also have been a friendship portrait proposed by Holl. The composition is comparable to that of Holl’s portrait of Cousins, showing the seated sitter looking left with an engraving as background. Similar also is Holl’s 1880 portrait of George Graham [5] which moreover uses the same landscape-format canvas as the present work. The muted tonal values are shared by most of Holl’s portraits.

As in all my father’s portrait work - all, at any rate, up to this date – his method had been invariably the same – and consciously so, I feel sure - that of relying upon contrasting effects of light and shade, of black and white, of silhouette’ The effectiveness of this method ‘ was partly due to its admirably vigorous grip of the individuality, and partly to its “sudden” and vivid illumination; the shadows are masses of black and bitumen, the lights equally broad masses of cold colour, whitish in the flesh. To attain this sheer force of light and shade he seems to have conceived his effect as though yielded almost by limelight, and mainly in black and white – possibly his early training and daily association with my grandfather, an engraver, taught him unconsciously to regard his subject as a mass of black and white, that is to say, he learnt to look for tone rather than colour, surely a valuable and excellent principle. [6]

He always likes to know his man first, to watch his characteristics, his features and his phases of expression. If he does not already know him, the first sitting is more often than not occupied with conversation by the fireside, during which, unknown to the sitter, the artist takes mental notes of his victim’s little ways. He then seats him on the ‘throne’ and lets him assume the attitude that comes most easy and natural to him – always however in repose. This I know to be one of Mr Holl’s theories of portraiture, that repose is necessary…[7]

he had a habit of jotting down in pen or pencil on any scrap of paper a few rough lines which, though meaningless to an outsider, was the result of some sudden inspiration, as to the action of a hand, the turn of a shoulder, or any suggestive idea in connexion with the work that entered his head, his work seemed always with him, and he absolutely lived in his sitter during the time he was transferring his individuality to canvas. [8]

Then, according to Spielmann,

Taking up a canvas prepared with a white ground, Mr Holl at once attacks the picture in colour. He never paints, like Mr Watts for example, on a coloured ground, nor does he begin by drawing in monochrome, or in blacks-and-white … what Mr Holl wishes to avoid is that ‘underdone’ look, so ‘low in tone’ that we often see in portraits, with the loss of freshness, all of which arise from the use of toned grounds or monochrome sketches… [9]

Both writers noted that occasionally Holl was dissatisfied with his first effort and put the first attempt aside; according to Reynolds, 'If he could not realize his idea, if the individuality of the man remained undetermined, or if he felt unable to strike the right note at first, he has, on occasion, even though practically finishing the portrait, made a complete change and started the whole thing over again'. [10] In two instances, he admitted defeat ‘and would try no more’. [11] In Reynolds's view, ‘whenever a radical change had to be effected, it was invariably for the better…' [12]

These accounts raise the possibility that Holl’s other existing portrait of Agnew (see All Known Portraits, By other artists, 1883) [13] was the artist’s first attempt, set aside when a ‘complete change’ from frontal to profile presentation was decided upon. The present work certainly presents a more intimate view of Agnew, in an ‘easy and natural’ attitude; the slim volume (of verse?) he holds suggests a more contemplative, cultured spirit than that of the successful dealer, politician or genial clubman seen in other likenesses, as if the initial sittings gave Holl insight into a more private personality. The artist’s relaxed rapport with his sitter places this work among his most perceptive and successful portraits.

Reynolds lists Agnew’s portrait among those executed in the spring of 1882, at a time when in order to maximize income to support his family and build a new house [14], Holl accepted all commissions. In view of the date on the canvas, and Holl’s swift portrait production, it seems likely that the present work was actually painted during the winter season 1882-3. In just one decade (1879-1888) he produced around 200 portraits, which ‘followed each other as quickly as they could be painted; always two sittings a day, and occasionally a third. It was simple slavery, but a slavery whose bonds were those of joy and enthusiasm. Nothing could induce my father to ease off even for a day…’ [15] A total of 24 portraits, together with two subject pictures, were executed during 1882.

First hung at the Royal Academy in 1883, shortly after Holl’s election as a full Academician, the portrait of Agnew attracted surprisingly little critical attention, given its accomplished and sensitive depiction of an influential man. One favourable comment, in the Manchester Guardian (from the city where the Agnews’ firm had its headquarters) described it as an ‘admirable portrait ... in some respects the best of the many examples of his art by which this facile and accomplished painters is represented’. [18] The Times commended Holl’s portraits for their ‘strength’ and ‘truth’: ‘he seems to seize and grasp the character of his sitter and to stamp it on the canvas in a way which shows unmistakeable mastery. There is nothing poetical in his portraits, as there so often is in those of Mr Watts; they depend on their success on sheer forcible painting, together with their dramatic suggestiveness’. [19] Nonetheless, the critic did not cite the present work; nor did Emilia Pattison (Dilke) in the Academy, who emphasised the ‘great sensitiveness in reading character’ in Holl’s portraits of this year. [20]

This low-key reception was partly due to the number of portraits shown by Holl this season - eight at the RA (including Bright, Wolseley and Cambridge) and four at the Grosvenor Gallery (including Tenniel and Hart) - and the fame of these sitters, especially Wolseley, posing in the uniform worn during the recent battle of Tel-el-Kebir in Sudan. In addition, Agnew’s portrait was hung not in the prestigious main gallery but in room XI, being thus briefly described by the Art Journal: ‘Seated in front of the late F. Walker’s Wayfarers, head turned to towards the spectator [sic]. Natural and easy in pose’. [21]

The portrait remained with Agnew, his family and firm until 2013 when it was placed on loan to the Gallery, being purchased with assistance from The Geoffrey and Julian Agnew Charitable Trust, 2015.