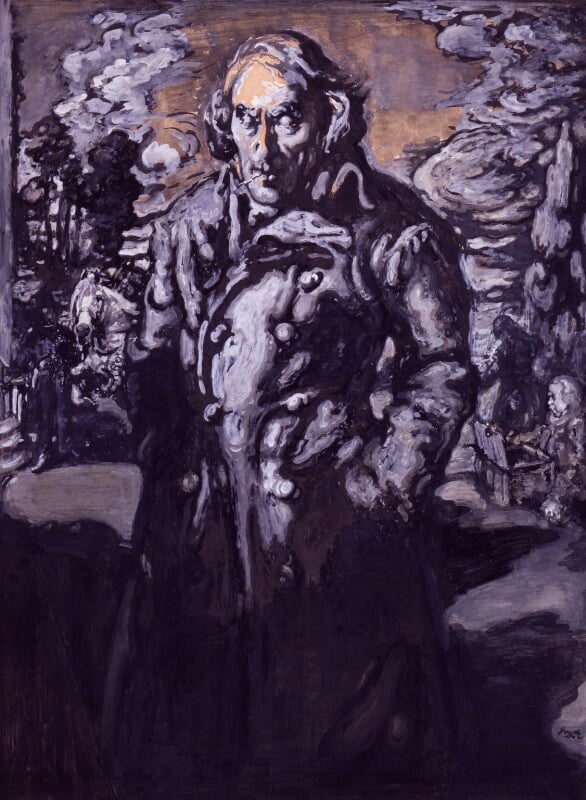 Charles Reade’s play The Lyons Mail, a drama set in revolutionary France, opened at the Lyceum Theatre, London, on 19 May 1877. [1] This spectacular image by James Ferrier Pryde shows Henry Irving in the part of Dubosc, an eighteenth-century highwayman. It was the sort of role Irving excelled in: in a plot based on mistaken identities, a wicked man (Dubosc) is pitted against a similar-looking guileless one (Joseph Lesurques, also played by Irving), with inevitable consequences.

Years later, Ellen Terry wrote about Irving’s reliance on expression rather than on make-up, when needing to switch between characters on stage: ‘In dual parts Irving depended little on make-up. […] He knew its uselessness when not informed by the spirit. […] His Lesurques was different from his Dubosc because of the way he held his shoulders, because of his expression [not face paint].’ [2] And Laurence Irving has described the enduring success of his grandfather’s portrayals of Lesurques and Dubosc: ‘Irving seized upon The Lyons Mail and made it his own; it remained, until the end of his life, one of the most popular pieces in his repertoire. His Lesurques, a blameless and much-loved paterfamilias, baffled by the hideous and meaningless accusation brought against him, was played in the best vein of cumulative tragedy; his Dubosc was a masterpiece of macabre and sardonic humour, a monster of drunken devilry.’ [3]

The macabre is a quality often associated with Pryde’s work also. [4] His father Dr David Pryde brought up the family to worship Irving, and chaired banquets for the actor in Edinburgh in the 1880s. ‘Jimmy’ Pryde slipped into Irving and Terry’s London circle in the 1890s.

NPG 6567 is one of several images by Pryde of Irving in character. These include poster designs, created with William Nicholson and signed ‘Beggarstaffs’, showing Irving as Thomas Becket (1894); as Don Quixote (1895); and as Robespierre (1899); and a profile drawing by Pryde of Irving as Dubosc (c.1897). This would seem to suggest that the undated NPG 6567 belonged to the same period as these 1890s works, particularly as Pryde exhibited a portrait of Irving as Dubosc at the New Gallery in 1902. [5] But in her memoirs Ellen Terry asserts the gouache was posthumous: ‘Mr Pryde has done an admirable portrait of me as Nance Oldfield, and his “Irving as Dubosc” shows the most extraordinary insight. “I have really tried to draw his personality,” [Pryde] wrote to me thanking me for having said I liked the picture (it was done after Henry’s death) … “Irving’s eyes in Dubosc always made my hair stand on end, and I paid great attention to the fact that one couldn’t exactly say whether they were shut or open. Very terrifying….”’ [6] Another undated and presently untraced portrait of Irving by Pryde, a stylized head, again with fathomless eyes, also dates to around 1906 (see ‘All known portraits, II. In stage character, The Lyons Mail, Posthumous’).

In Terry’s view the portrait was a satisfying description of Irving in the part, and she congratulated Pryde: ‘The Dubosc is perfectly splendid, the expression of the whole man in the part is there … the humour … the devilment … the strength.’ [7] Her son Edward Gordon Craig elevated it to the level of James McNeill Whistler’s portrait of Irving as Philip II: ‘Of all the many paintings and drawings of H.I. I know but little – but Whistler’s and Pryde’s are, with this Lepage [see NPG 1560], the three best paintings I know.’ [8]

Derek Hudson, author of the earliest monograph on James Pryde, placed NPG 6567 in the body of his work by drawing parallels with Pryde’s fantastical drawings of rascals and beggars (c.1899–1902), and also with his lithographs of ‘Celebrated Criminals’ (published 1907). Hudson also praised the print by Charles Chenil & Co. Ltd:

All these essays in imaginative portraiture reached their climax in the great memorial water-colour of Sir Henry Irving as Dubosc in The Lyons Mail, on which his claim to pre-eminence in this department can confidently be rested. This painting was reproduced as a two-colour plate, in 1906, the year after Irving’s death, and created something of a sensation. Critic after critic joined in praising it. Thus, the Daily Mail: ‘It is not only the best portrait as such of the great actor, but the artist has caught in it the whole unreal atmosphere of the stage. Even in future days, to a generation that will know the art of Irving by hearsay only, this picture and its reproduction will remain an ideal embodiment of a character created by a great actor’. [9]

Pryde’s habit of hand-finishing some of the prints (which were to scale with the original) in oil, watercolour or gouache, for presentation as gifts, blurred the divide between original and reproductions, and produced sheets to fox cataloguers. [10] But untouched-up prints were also prized, and the Pall Mall Gazette urged readers to acquire copies:

This portrait is a thing that every art lover should secure. It is an unforgettable portrayal of the great actor. In the suggestion of limelight and the chromatic effect that Mr. Pryde has woven about the figure of Irving, we have a marvellous theatrical atmosphere. But it is in the vivid life-like head which seems to give out the very action and voice of the man, in which the haunting manner of the actor’s whole strange artistry is caught, that the painter shows himself a rare master. The head of this Irving is a marvellous piece of work, and makes the portrait the greatest of the many that have been painted of him. [11]

In 1949, when Hudson wrote his monograph on James Pryde, the gouache of Irving as Dubosc was still untraced, and he wrote that ‘search for the original of Irving as Dubosc, which should belong to one of our national collections, has failed’.[12] Then, at a date unknown (but certainly before Guinness’s death, 5 August 2000) it was given by Sir Alec Guinness to Sir John Gielgud. [13] Gielgud, who died on 20 May 2000, bequeathed it in his will – together with a portrait by Pryde of Ellen Terry as Nance Oldfield (NPG 6568) – to the National Portrait Gallery.

Three-quarter-length slightly to left, standing with hands thrust in pockets of greatcoat, bare-headed, cigarette between lips; cloudy sky and landscape background with man and horse at left and two figures at right.

Sir Alec Guinness; given to Sir John Gielgud; by whom bequeathed to the NPG, 2001.

Reproductions after lithograph after NPG 6567: