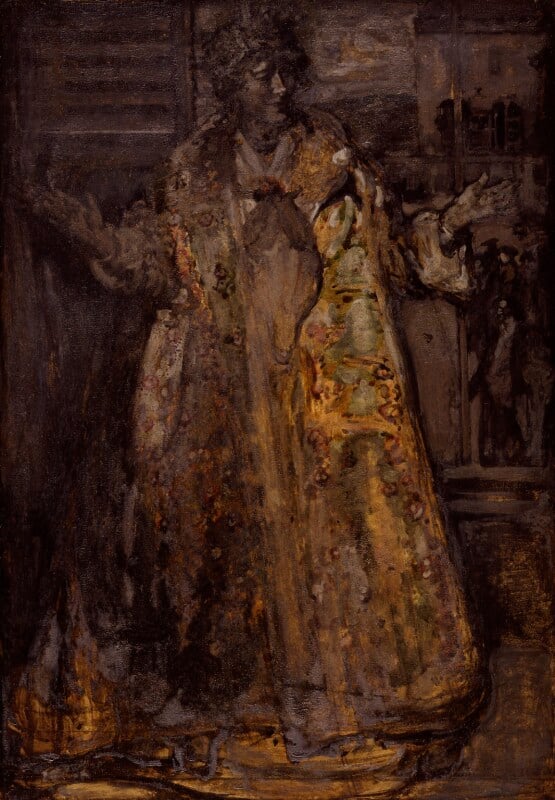 Nance Oldfield opened at the Lyceum Theatre, London, on 12 May 1891 with Ellen Terry playing the title role. The comedy, written by Charles Reade, concerns the life of a popular eighteenth-century actress. Terry’s son (Edward Henry) Gordon Craig acted alongside her as Alexander Oldworthy, a poetic youth who professes his romantic devotion to the star, and whom she dissuades by means of clever tricks and diversions. Such was the success of this play that Ellen revived it frequently in succeeding years, with Laurence Irving, John Martin-Harvey and Harcourt Williams subsequently playing Craig’s part. [1]

James Ferrier Pryde executed three known portraits of Terry in the role. The first, an oil on canvas dated 1894, depicts Ellen standing to front with hands outstretched to either side (private coll.). Over her dress she wears a long coat with upturned sleeves and a wide collar. A contemporary photograph by Window & Grove featuring the actress in character with Craig shows this garment more clearly, with a branching floral pattern in imitation of Lyons silk (see V&A, London, S.133:550-2007). Evident also are the twists of fabric keeping her curls in place, just indicated in Pryde’s painting. During the 1890s the artist was particularly drawn to the world of the theatre, as manifested through his early foray into poster design. In 1908, Terry recalled the following:

The artists all loved the Lyceum, not only the old school, but the young ones, who could have been excused for thinking that Henry Irving and I were a couple of old fogeys! William Nicholson and James Pryde, who began by working together as The Beggarstaff Brothers, and in this period did a poster of Henry for Don Quixote and Becket, were as enthusiastic about the Lyceum as Burne-Jones had been. Mr Pryde has done an admirable portrait of me as Nance Oldfield, and his Irving as Dubosc [NPG 6567] shows the most extraordinary insight. [2]

It is not know whether the actress provided sittings for Pryde, although this is certainly possible. His father Dr David Pryde (1834-1907) was on intimate terms with both Terry and Henry Irving. [3] ‘Jimmy’ Pryde himself was counted as one of Terry’s friends; in 1897 he was invited to a dinner at the Grafton Galleries as one of her personal guests. [4] The first 1894 portrait shows Ellen in character, but she is not positioned within a theatrical setting. Rather, drawings or paintings pinned to the wall behind suggest her presence within the artist’s studio. This, combined with the unfinished nature of the lower half of the composition, indicates a primary function as a preliminary design or figure study. In the National Portrait Gallery's version, the pose and costume are exactly replicated, yet in this case Terry stands against a partly shuttered lattice window; a street scene featuring indistinct figures can just be glimpsed beyond. Pryde has carefully rendered the full length of the patterned coat, which dominates the foreground. Through use of dark tones and the application of heavy layers of varnish or resin, the artist achieves the rich and atmospheric effect which characterises the range of his single-figure studies – see for example An Old Beggar (Birmingham MAG, Birmingham, 1946P42) and Moll Cutpurse (NGS, Edinburgh, GMA 3596).

NPG 6568 was previously dated to 1906, but it is more likely to belong to the 1890s and may be directly related to the 1894 oil. The lack of an obvious development of style often makes Pryde’s work difficult to date, but this particular misunderstanding possibly originated from a 1948 sale catalogue, which incorrectly lists the NPG’s portrait of Terry as ‘painted for the souvenir programme of her Jubilee performance at the Theatre Royal, Drury Lane’. [5] Terry herself records the occasion:

When the details of my jubilee performance at Drury Lane were being arranged, the Committee decided to ask certain distinguished artists to contribute to the programme. They were all delightful about it and such busy men as Sir Lawrence Alma-Tadema, Mr. Abbey, Mr. Byam Shaw, Mr. Walter Crane, Mr. Bernard Partridge, Mr. James Pryde, Mr. Orpen, and Mr. William Nicholson all gave some of their work to me. [6]

The version the artist submitted was not in fact the NPG’s, but a smaller grisaille replica in pen, ink and wash (private coll.). John Singer Sargent executed a new version of Terry as Lady Macbeth in 1906, specifically for reproduction in this publication (NPG 2273). In a similar vein, Pryde probably realized that his existing oil would not reproduce well and produced another, more tightly worked, design for this purpose, although unlike Sargent’s replica this is not explicitly mentioned by Terry in her memoir. Comparison with the image published in the programme confirms that this third portrait formed the basis for the reproduction.

The 1948 sale at Christie’s dispersed the effects of the late Mrs James Pryde (from whom the artist had separated in 1914), suggesting that NPG 6568 remained in the family’s possession. Derek Hudson’s 1949 monograph on Pryde records that the painting was purchased from this sale by Thomas Agnew & Sons Ltd. It is described here as ‘varnished gouache’, [7] although an NPG condition report from 2004 confirms the medium as oil or oil/resin. [8] It, along with the portrait of Henry Irving as ‘Dubosc’, was bequeathed to the Gallery by Sir John Gielgud, who died on 20 May 2000. Gielgud, Terry’s great-nephew, presumably purchased it from Agnews.

Whole-length, standing to front with hands outstretched to left and right, slight profile to right, in interior with view through window in background.

International Society of Sculptors, Painters, Gravers, 1901 (20, as ‘Miss Ellen Terry as Nance Oldfield’ – either the 1894 oil or the NPG version).

[Jubilee Souvenir Programme] ‘Souvenir Programme given by the Theatrical & Musical Professions as a Tribute to Miss Ellen Terry, on the Occasion of her Jubilee’, 12 June 1906, fig.6 (copy Bristol Theatre Coll., TCW/M/000037)