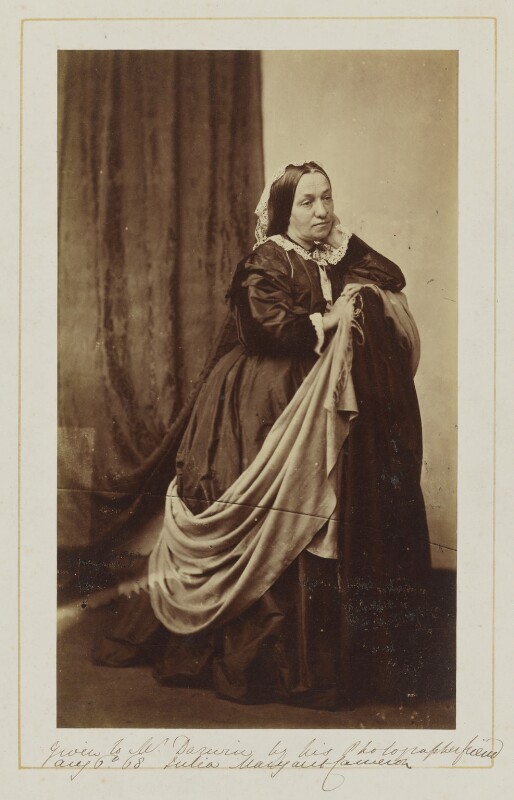 Inscr. by sitter on mount: ‘Given to Mr Darwin by his Photographer friend / Aug.6th 68 Julia Margaret Cameron’.

As her inscription indicates, this portrait by an unidentified photographer was presented by the sitter to Charles Darwin, during the Darwin family’s visit to Freshwater on the Isle of Wight in summer 1868, when Cameron photographed Darwin (NPG P8), his brother Erasmus and his son Horace. [1]

The Darwins rented a house from the Camerons for their six-week vacation. According to Colin Ford, although Emma Darwin at first thought Cameron was ‘quite queer’, the family was won over during their stay; Emma wrote, ‘We ended in a transport of affection for Mrs Cameron, Eras[mus Darwin] calling over the stairs to her “you have left 8 persons deeply in love with you”.’ [2] Ford adds that as this was ‘one of the all-too-rare occasions when Cameron was paid for her work … [p]erhaps that was why she gave Darwin a photograph of herself dressed in her usual individual fashion.’ [3]

The portrait has not thus far been exactly dated. It could have been produced in 1868, or at an earlier date. While not identical, Cameron’s dress and appearance are comparable in two images ascribed to c.1858, although she looks here rather older than in the portraits taken by Oskar Gustave Rejlander in 1863 (see ‘All known portraits’). Two prints are known; [4] both show a line across the width of the image level with the sitter’s knees, indicating a crack in the glass negative.

The initial impression of the image is of a commercial studio setting, with a heavy drape and an apparently shrouded plinth on which the sitter rests her elbow and fringed shawl. However, compositional and technical elements indicate that the portrait is less straightforward, and that Cameron probably had some degree of participation in both the composition and printing.

While Cameron could have sat for a professional portrait in London or elsewhere any time before summer 1868, the print bears no studio stamp or markings and its size is larger than that usually issued commercially. The image moreover shows an assembly of fabrics untypical of studio practice, which normally used prefabricated backdrops and careful but conventional arrangement of drapery to camouflage the untidy fringing and looping seen in NPG P880, where the apparent looping-up of the curtain behind the figure is especially difficult to interpret. In her own work, Cameron often wrapped sitters in heavy velvets and other textiles, both to convey costume and character and for picture-making purposes; light-absorbing fabric behind and around sitters helped create her familiar dark backgrounds. Although this image does not deploy her favoured head-and-shoulders close-up, a comparable organization of material produces what can be regarded as a Cameronesque ‘theatre of production’. It seems likely that the sitting took place in her home, rather than a commercial studio, and that she played an active role in its direction. In such a hypothesis her control of self-representation would also have extended to the choice of presentation, in the vein of a formal studio portrait rather than interpretative head study; this might argue for an earlier rather than later date.

The origin of the print is equally hard to determine. Its dimensions are smaller than those produced by Cameron’s own cameras in the 1860s, which suggests another photographer was involved in creating the negative. The print has spots, smears and other marks (some of which have been retouched) indicative of a distinctly loose, even careless printing technique not unlike Cameron’s own unorthodox working methods. [5] Joanne Lukitsh documents Cameron’s printing of negatives taken by others, including Reijlander, before she owned a camera and it is feasible that, having retained the cracked plate of this image, she printed it up to present to Darwin. [6] On the left edge of NPG P880 a rectangular shape extends above and below the crack-line, which could come from tape or paper securing the broken glass for printing. This, too, accords with Cameron’s habit of keeping and later using damaged negatives.