1 of 4 portraits of Benjamin Waugh 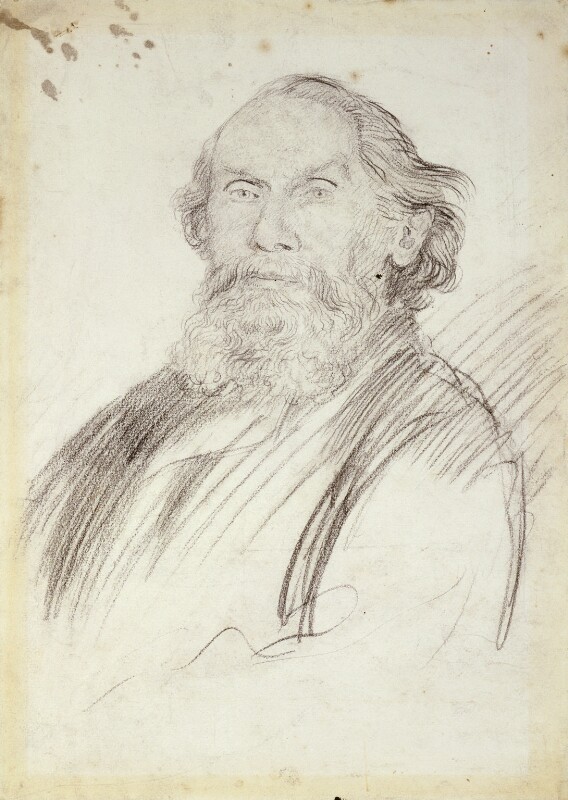 Augustus John joined the Slade School of Art in 1894, a year after Benjamin Waugh’s daughter Edna enrolled at the age of 14. They became close friends within a peer group including John’s future wife Ida Nettleship, Gwen John, Gwen Salmond and Ambrose McEvoy. [1] They would practice their draughtsmanship by repeatedly drawing one another; in 1971, Edna remembered that sometimes after classes ‘I would go with Gwen John and her brother to their rooms in Charlotte Street, where we would sit for each other.’ [2] Rosa Waugh joined the Slade after her elder sister and also became associated with this circle. She is featured in an early watercolour by Gwen John (c.1897–8), showing a group within the Johns’ lodgings, which also includes Gwen’s only known portrait of her brother. [3] Throughout this period, the Slade friends visited the Waugh family home in St Albans. Edna recalled a memorable early visit in 1895:

Augustus John and I went for a very long walk. I found it very hard to keep up with him mile after mile as he strode along at a great pace. At last, as I almost ran beside him, I confessed that I was very tired. He stopped and looked at me in surprise – I think he had forgotten I was there, so lost in thought was he. Then, without a word, taking my hand, he stuffed it into his pocket with his own and on we went as before, but for me with a difference, for I was curiously comforted by the tight hold of his hand on mine. [4]
It is likely that Augustus had the opportunity to sketch Benjamin Waugh during one of these visits. After Edna’s marriage to William Clarke Hall in December 1898, John began to visit her at her married address instead. [5] Therefore it is probable that the portrait was executed between 1894 and 1898; a date of c.1898, at the furthest end of this range, seems appropriate. This delicate pencil study records Waugh in the last phase of his life, after successfully establishing the Society for the Prevention of Cruelty to Children on a national footing. It is very close in appearance to a photograph of the mid-to late 1880s, which clearly documents the prominent brow and full, wispy beard (see ‘All known portraits, Photographs’). In 1906, NPG 6595 was published as an etching (signed lower right) and released as an edition of 25 prints. [6] One of these is now in the National Museum and Gallery of Wales, Cardiff (NMW A 3487) and another is held at the NSPCC. [7] When Rosa Hobhouse (née Waugh) visited the National Portrait Gallery in 1954 to discuss the proposed donation of NPG 3909, an internal memorandum recorded ‘There is a John etching of B.W, but the family, according to Mrs Hobhouse, do not approve of this as a likeness.’ [8]

Indeed a certain hard edge has crept into the etched version of this portrait. Increased definition of line gives the impression that Waugh’s brows are knitted into a determined frown, whilst the expression on his face is rather stern and unyielding. In contrast, the features in the drawn portrait are handled with great sensitivity and present a vitality somewhat lost through the process of engraving. John’s early draughtsmanship garnered favourable critical response, his drawings widely praised with regards to the quality of line and keenness of observation. [9] Rebecca John, the artist’s granddaughter, remarks of his technique: ‘Augustus John drew at great speed, not to race the light, but to catch a moving figure, a turned head, a face in repose.’ [10] Through a series of rapid yet precise pencil strokes, the artist captures the quiet dignity of the sitter, who appears confident in his position and the extent of his achievements.

Caspar John; by whom given to Mrs R. MacDonald Hall; purchased by the NPG from Christie’s, South Kensington (Hazlitt, Gooden & Fox Ltd), 2001.