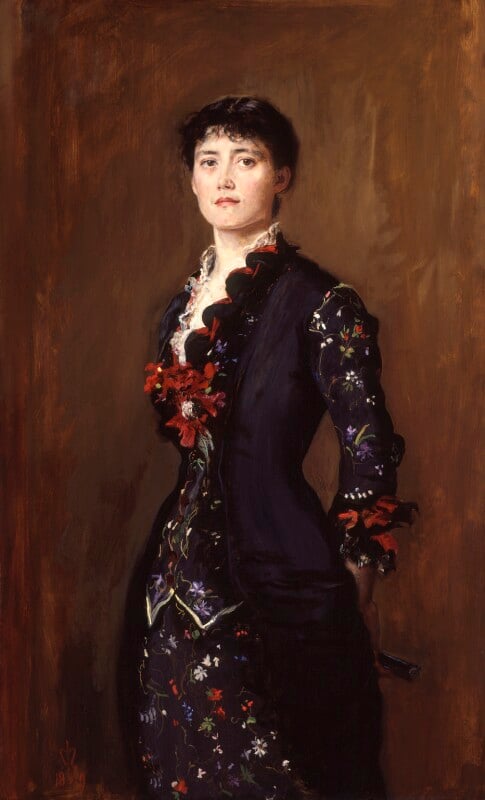 The sitting that produced this portrait was informal, an act of long-established friendship. Joseph Middleton Jopling had married Louise Romer in 1874 and ‘for years after that Mr and Mrs Jopling were constant visitors at Cromwell Place and Palace Gate, and many were the pleasant evenings we had when Joe and his clever wife dined with us en famille’, Millais’s son later recalled. [1] In the late 1870s John Everett Millais was living in Palace Gate, Kensington. He had a thriving practice, with sitters who had recently included Thomas Carlyle (1877), Lillie Langtry (1878) and Gladstone (1879); his fees were famously high. Joseph Jopling was a successful but not particularly distinguished watercolourist, a friend since the 1860s. Louise, on the other hand, though younger, was a professional in her own right, more on a par with Millais, and she clearly stimulated him. In 1875 the Joplings made ‘Jack’ Millais a godfather to their son Lindsay Millais, and two years later he painted NPG 6612 – a generous gesture from one so busy. ‘Ah, my godson! I never gave him a cup at his christening, so I’ll give him the “mug” of his mother now,’ he apparently joked. [2]

There are two accounts of the sitting, both of them by Louise Jopling, the first one provided to Millais’s son and biographer and the second one published in her memoirs Twenty Years of My Life (1925). [3] The portrait was painted very quickly:

[Millais] painted my portrait in the extraordinary short time of five sittings. In his generous way he wished to divide the credit. ‘Ah it takes a good sitter to make a good portrait. If you had not sat so well, I shouldn’t have made such a good thing of it, but’ – then he would laugh – ‘I nearly killed you, you know!’ For the five consecutive days’ standing had really knocked me up. [4]

In her memoirs she wrote:

I arrived [at the studio] about 10.30, stood until lunchtime, and then had about another hour after. It took [Millais] exactly five days. But then I sat with all the knowledge of a portrait painter. I knew that the better I sat, the sooner the work would be finished, and, also, the better the portrait would be. And so it turned out, for Millais’ portrait of me is considered to be the finest woman portrait he ever painted. [5]

Louise Jopling’s account also describes the choice of clothes: ‘We had great discussions as to what I should wear. I had at that time a dress that was universally admired. It was black, with coloured flowers embroidered on it. It was made in Paris.’[6] She also tells an anecdote to explain the particular quality of her expression:

Of course I naturally made my expression as charming as I possibly could, and on the third day it was just delightful in the portrait […] We commenced talking about other things, and, alas, I forgot to keep on my designedly beautiful expression, for our subject was something that made me feel very indignant, and suddenly Millais said: ‘Oh, we mustn’t go on talking about this!’ and looked doubtfully at me, and doubtfully at the picture. Down I jumped off the model table, and ran to look at it. All its beautiful expression had vanished, and in its place had come the look that I must have had – a defiant, rather hard one. […] Still, perhaps it is as well, for no doubt the face gained in character, and perhaps, to live with, is better than a sugary-sweet expression. [7]

In the end, all parties were rewarded. ‘I am truly glad I have pleased my old friend,’ Millais wrote to Joe Jopling, for whom the portrait had been painted. ‘I thought you would be satisfied, because it went so comfortably, and I felt at liberty to do exactly what I liked.’ [8]

There is a French tone to the work. Louise Jopling’s colouring and the brilliant painting of the Parisian outfit recall Manet’s female portraits of the period. In 1878 Millais had made several visits to Paris, exhibiting at the Exposition Universelle and receiving the medal of the Légion d’Honneur. When it came to painting Louise the following year, this exposure to recent French art, the sitter’s feistiness, familiarity and the common professional background inspired the unusually direct and rapid handling. The effect extends to the frame, which is in an early eighteenth-century French style. [9] Louise would have recognized the references, and it is this subtle understanding between artist and sitter that gives the work its peculiar charge. [10]

The picture created a stir when it was exhibited in London in 1880. James McNeill Whistler (who had painted a whole-length of Louise Jopling in 1877) declared it ‘superb’. It was shown at six different exhibitions (including Paris in 1882) in its first decade alone, and the need arose for a good-quality reproduction: ‘Many people, my friends especially, advised me to have my portrait by Millais photogravured,’ wrote Jopling. ‘Millais promised to correct the proof, if any corrections were required. By circularizing my friends, I obtained a sufficient number of subscribers to pay the cost of the photogravure, and, thanks to Millais’ supervision, the result was most satisfactory.’ [11]

Lindsay Millais Jopling – the artist’s godson – presented the portrait to the nation in 1919 (NG 3585). It remained in the public domain for about forty years at a time when High Victorian art was least fashionable, shuttling back and forth between the National Gallery and the Tate, rarely put on display. In the end the ‘conditional’ (and ambiguous) terms of the gift proved too problematic and the picture was returned to the donor in 1958. [12] Two years later Jopling placed the painting on loan with the Ashmolean Museum, Oxford, where it remained until it was sold at Sotheby’s, 22 November 1988 (45), and purchased by R.W. (‘Tiny’) Rowland.

In 1884 Millais took the portrait back to repair some cracks in the paintwork: ‘I have taken out all the cracks and think that it will stand now until we are all dust and ashes,’ he wrote to Joseph Jopling; the general good condition of the work was confirmed by a conservator’s report in 2001. [13]

Three-quarter-length, standing to left, head turned to viewer, hands clasping fan behind back, wearing a fitted black dress embroidered with flowers, posy of flowers on bodice.