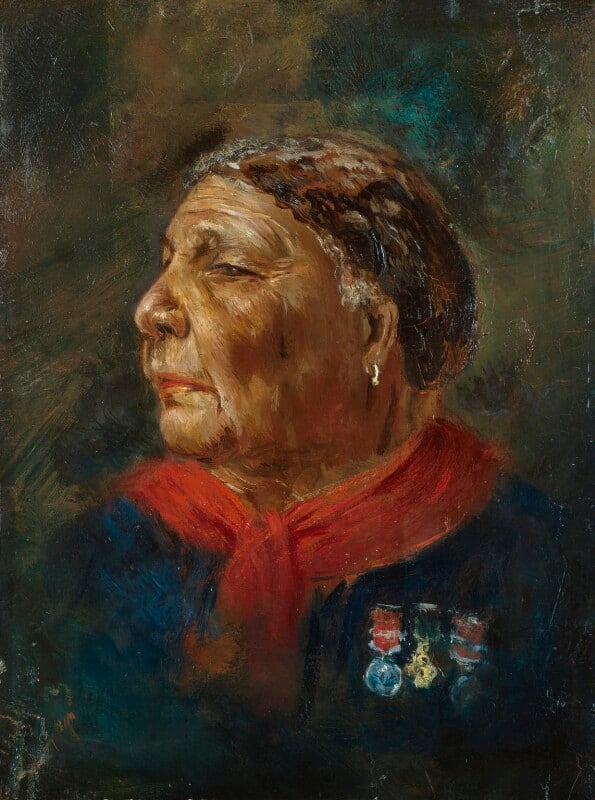 This portrait dates from the last period of Mary Seacole’s life, when she was in her sixties. She wears a traditional Caribbean scarf and three roughly delineated medals commemorating her involvement in the Crimean War (1854–6).

The medals depict miniature or ‘dress’ versions of official decorations, obtainable from military tailors and commercial jewellers, rather in the manner of souvenir versions. Although indistinctly rendered, the two circular silver medals with clasps on crimson ribbons represent the British Crimea Medal, albeit on an irregular ribbon, [1] with the cross bars representing two battles which Seacole witnessed. The golden star on a green ribbon represents the Turkish Order of the Mejidie (5th Class), which was widely distributed to British combatants by the Ottoman government, and also to Seacole, according to press reports, which endorsed public support for British recognition of her work. [2] Although not given an official British honour, Seacole is recorded as publicly wearing medals in 1856 [3] and in all portraits for which she sat, including photographs, she is shown with them, which indicates this was her choice. As it was and is not illegal to wear such miniatures Seacole presumably chose to demonstrate her comradeship with Crimea veterans in this manner.

After her return to Britain in 1856, Seacole and her business partner were obliged to file for bankruptcy. To raise funds for her support, sympathisers in the British Army organised a sequence of benefit evenings in mid-1857 which coincided with the publication of her autobiography. She herself declared readiness to travel to India, then in the midst of insurrection, but she (together with a large group of nurses from Scutari) were told by the East India Company there was ‘no opening’ for such volunteers. [4] In 1859 she returned to Jamaica, then in 1863 revisited Panama and in 1865 travelled back to Britain. Further fund-raising in 1867 enabled her to live independently, mostly in London, until her death. Early in 1869, when it is presumed this portrait was executed, she was living near Portman Square. At the end of March she wrote to the artist’s sister, with warm greetings to the recipient’s parents and brother, indicating that she was well acquainted with the artist’s family at this date; she also expressed the hope that ‘Albert will be successful in getting the Painting in the Academy’. [5]

The artist’s name on the back of the panel may indicate that the work was submitted for exhibition in the Royal Academy summer show, although Seacole’s letter does not conclusively confirm this, and no picture by Challen was ever shown there. The present work is on a small mahogany panel such as were prepared for artists’ use, but which in this case has been roughly sawn to reduce its size. Analysis shows that it had previously been used for another painting, possibly a landscape, containing green pigments which lie beneath the portrait. These facts, together with the rather rough brushwork by an artist able to model features yet unsure how to render the reflection of light on skin, suggest that it is more in the manner of an oil sketch than a fully finished painting. However, if the portrait does date from early 1869, it coincided with a tour of Egypt undertaken by the Prince and Princess of Wales between February and April, which was followed by a four-day visit to the Crimean battlefields and cemeteries. They were accompanied by William Howard Russell, the Times correspondent who had reported on the war in 1854–5, and the event was popularly characterised as the ‘Return to the Crimea’. [6] This prospect may have prompted the artist to ask Seacole to sit to him, in anticipation of renewed public interest in the war, and to be sufficiently pleased with the result to submit it for exhibition.

The letter indirectly confirms the inference that the portrait was drawn from life. The other extant likenesses, in photographs and line drawings, depict Seacole full-face, whereas here Challen has chosen a less usual profile view, as if the sitter is turning from the viewer. It emphasises the pillowed cheek and drooping eyelid of old age, and moreover draws visual attention to the medals. It also conveys the impression of a characteristic pose by Seacole.

Albert Charles Challen was born in Islington, the son of a warehouse manager. No details of his training have come to light, nor is any exhibition information known apart from his unsuccessful submission to the RA in 1869. In 1861 he and six siblings were living with their parents in Islington; by 1871, after the death of their mother in 1870, the family were resident in Hammersmith, and by 1881 they had moved to Camberwell.

Both artist and sitter died in 1881. [7] The work remained with the Challen family, being lastly in the possession of the artist’s niece Dora Challen, until her death in 1967. At some stage being used as a backboard for another picture, it remained invisible until de-framed sometime before autumn 2002 when it was entered into ‘a small auction at Shipston-on-Stour’ [8] and purchased by a local antique dealer, Jerry Warren, who asked a member of the Orders & Medals Research Society for help in identifying the decorations depicted. This contact led to Helen Rappaport, who recognised the sitter and purchased the portrait, [9] which she loaned and subsequently sold to the Gallery in 2008. The purchase was enabled by a public appeal and a grant from the Heritage Lottery Fund.

1) Our thanks for information to Michael Hargreave Mawson, Crimean War Research Society 2014. Much debate has focused on disputing Seacole’s right to wear such decorations – see for example correspondence in History Today, Mar. 2005, p.62.
2) See for example Derby Mercury, 14 May 1856, p.6: ‘The Turkish government has given Mrs Seacole a medal for her services to the Turkish troops – and without doubt a Crimean medal with the Sebastopol clasp would be well bestowed upon her.’ See also Manchester Weekly Examiner & Times, 8 Nov. 1856, p.4, cited in Staring-Derks et al. 2015.
3) Robinson 2005, p.167.
4) See correspondence published in Daily News, 21 Sept. 1857, quoted in Staring-Derks et al. 2015. The following February several newspapers reported that Seacole was ‘about to sail for India and commence again her work as mother, nurse and friend to the British soldier’ but the East India Co. vetoed all such independent initiatives; Staring-Derks et al. 2015.
5) Letter from Mary Seacole to Matilda Challen, 31 Mar. 1869, quoted in James 2010, p.54.
6) See for example ‘The Crimea Revisited’, ILN, 5 June 1869, p.574. See Grey 1869 for a first-person account of the royal tour.
7) The portrait is not mentioned in the press report of Seacole’s will, which made many specific bequests to military officers, including Count Gleichen and his family, with the residue going to Seacole’s sister; ILN, 6 Aug. 1881, p.139.
8) NPG RP 6856.
9) Helen Rappaport, quoted in interview, Oxford Times, 18 Feb. 2010, online.