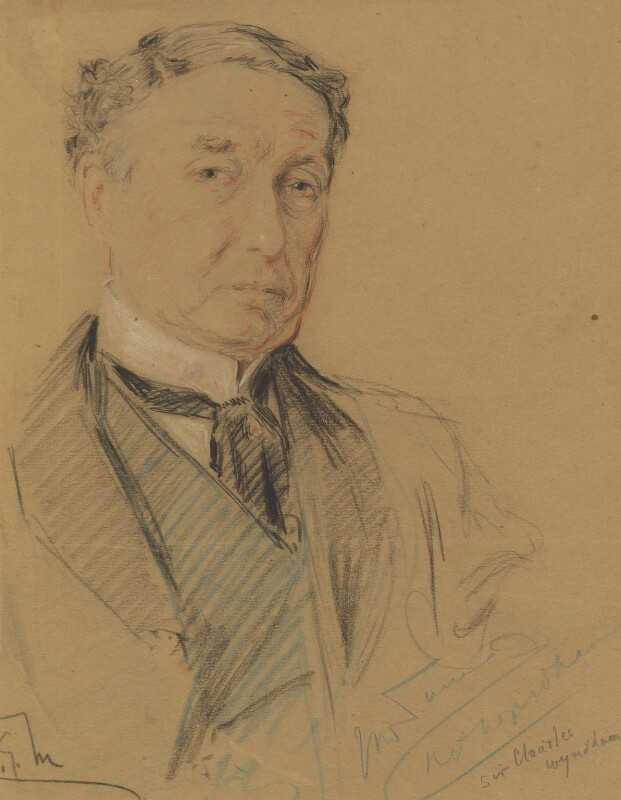 This portrait was purchased by the National Portrait Gallery in 2005 as part of a group of seven drawings (NPG 6729-35) and two engravings (NPG D21217-18) from Margaret Mathews, who inherited them directly from the artist, her father-in-law. The group comprises prominent figures from the Edwardian stage and society, and also includes Charles Wyndham’s fellow actor-manager Sir John Martin-Harvey, soprano Emma Albani and writer Rudyard Kipling. In 2011 the Trustees also acquired another portrait by Mathews, of leading suffragette Dame Christabel Pankhurst (NPG 6904). [1] NPG 6735 shows Wyndham in later life and was probably executed in the 1910s.

Richard George Mathews was born in 1870 in Montreal and worked for the Canadian Pacific Railway before joining the staff of the Montreal Star as a reportage artist in 1895. In 1907 he moved to London, where he began regularly contributing portraits of theatrical celebrities to the Graphic and the Bystander. [2] It is not clear where or indeed whether Wyndham sat for his portrait, although the inclusion of his signature, apparently in the blue chalk used in the portrait, and the general rapidity of handling suggest that the drawing was taken from life.

It is sketched on the reverse of a piece of paper that reproduces a poem by one George Murray in six verses, and which may have originally been part of a play bill or souvenir programme. The first verse of the poem has been cropped, although it is possible to pick out a theme, the professional endeavours of a group of travelling ‘minstrels’ extolled in the last verse: ‘And thus the gallant “troupe” we bless, / Whose shadows here we see; / And wish them, one and all success, / Where’er the wanders be.’ This makes it plausible that Wyndham’s likeness was taken by Mathews whilst he was on tour. The sitter is known to have taken his Criterion Company to North America on three occasions, in 1899, 1904 and 1910. [3]