This collection consists of 271 original caricatures for Vanity Fair by twenty-four different artists, the majority of which were reproduced as chromolithographs in the magazine between 1869 and 1914.[1] It forms a substantial section of the 350 or so images from this publication that are owned by the National Portrait Gallery. The medium is watercolour on paper throughout, with occasional body colour, and the subjects include a range of well-known personalities of the period. The freshness and vitality evident in these original drawings are lessened in the reproductive process; such liveliness adds to the value and rarity of this collection.[2]

Vanity Fair was founded in 1868 by Thomas Gibson Bowles, the magazine’s long-term editor and owner. He was the natural son of Thomas Milner Gibson, a prominent liberal politician, whose wife (Susannah) Arethusa held regular fashionable salons. It was in this environment that the young Bowles had the opportunity to mix with newspaper men, politicians, actors, authors, bohemians and artists.[3] In 1865 he was introduced to professional journalism by Algernon Borthwick, later Lord Glenesk, then editor of the Morning Post. While maintaining a junior position at the Board of Trade, Bowles began to write for a number of journals devoted to social and political affairs, including the Owl, the Glow Worm and the Tomahawk. The last was primarily a satirical publication and its success as a rival to Punch resulted from the ‘daring and originality’ of its full-page cartoons.[4] Financial complications led to its closure in 1870, but Bowles was able to combine the merits of this paper and his advantageous social connections to create his own publication. Its title was probably inspired by Thackeray’s novel and the tag, ‘We buy the Truth’, was taken from Bunyan’s Pilgrim’s Progress (1678). These were suggested by Colonel Frederick Gustavus Burnaby, a close friend of Bowles, who also supplied £100 of the £200 original investment.[5] The decision to publish in quarto dimensions with eight to ten pages per issue gave Vanity Fair an instant identity and set it apart from other satirical magazines.[6]

The first edition was published on 7 November 1868 – it contained no caricatures but the text featured commentary on the week’s social and political events and included theatre and literary reviews. From the outset, Bowles maintained tight control of the operation. He wrote much of the text himself under the pseudonym ‘Jehu Junior’,[7] and engaged regular contributors instead of members of staff. These individuals were selected from fashionable sets for their social as much as their literary qualifications. Indeed, Vanity Fair was a journal written by and for the Victorian and Edwardian Establishment, a magazine for those ‘in the know’.[8]

Despite this, it was not immediately successful and struggled with competition from rival publications. On 16 January 1869, Bowles promised his readers ‘Some Pictorial Wares of an entirely novel character’ and two weeks later appeared a full-page caricature of Benjamin Disraeli by Carlo Pellegrini, using the pseudonym ‘Singe’ (shortly afterwards anglicized to ‘Ape’). It was reproduced by Vincent Brooks – an expensive and highly regarded lithographer.[9] This was the first of over 2,300 caricatures to be published by Vanity Fair. At this date, colour lithography combined with portrait caricature was unprecedented in England. Previously, wood-engraving had been the popular form of reproduction, while lithographers focused upon decorative and topographical subjects. Aloys Senefelder (1771–1834) had invented lithography and chemical printing as early as 1798 but the process was only exploited by the periodical press in the last decades of the nineteenth century. Vanity Fair’s illustrations, instantly recognizable in terms of style and size, led to a rapid increase in demand for the magazine. It gradually became a mark of honour to be the ‘victim’ of one of its numerous caricaturists.[10] Bowles’s witty accompanying texts, full of insights and innuendoes, certainly contributed towards the popularity of these images.

Pellegrini undoubtedly influenced the nature of English caricature, which until his arrival in 1864 was still rooted in the savage mode of the Georgian caricaturists including James Gillray and Thomas Rowlandson.[11] His youth was spent in Naples, which in the 1850s and 1860s was a hub of social and artistic activity, second only to Paris.[12] The arts responded to the latest French fashions and this influence was particularly apparent with regards to caricature. The lithographed portrait chargé, introduced by Honoré Daumier in 1830, was a powerful mode of expression and by the 1860s it had become the most important feature of French political satire.[13] Although its impact in Italy was widespread, Italian artists were inclined to dilute the ferocity of their French models. Ormond records that by the age of 20, Pellegrini had captured the favour of Neapolitan society, which he ‘repaid with good-natured caricatures’.[14] Particularly inspiring to the artist was the work of Melchiorre Delfico, depicting Verdi and other Neapolitan celebrities. When introduced to the English after 1864, this gentle humour was immediately preferred to the more extreme French satire. Pellegrini’s collaboration with Bowles and Vincent Brooks was a great success. He was instinctively attuned to the wit of society journalism and according to Bowles had the innate ability to ‘charge and exaggerate such lines and tones as exist already’ in the faces and figures of his subjects. Indeed, the mark of a good caricaturist was the capacity to seize the ‘essential point’ of his subject, and emphasize it.[15] Yet despite this triumph, theirs was a turbulent relationship and the artist left Vanity Fair on several occasions in the course of his twenty-year association. He nevertheless continued to contribute until shortly before his death in January 1889.

In 1869 James Jacques Tissot began to produce images for the magazine under the pseudonym ‘Coïde’. Pellegrini’s regular English ‘Statesmen’ were replaced by a series of European ‘Sovereigns’, drawn by the French society painter. These were accompanied by eight other caricatures executed during his initial visit to London in the autumn of that year. Tissot’s second significant visit began in May 1871 when he stayed for a number of months at Bowles’s London home, during which time he contributed twenty-two drawings to Vanity Fair.[16] In contrast to Pellegrini’s obvious caricature, Tissot’s style inclined towards portraiture. He also took more of an interest in the process of reproduction. Instead of simply submitting a finished drawing to be reproduced, he drew the black outline on the stone himself and then had a copy printed to which he added the final details and colour.[17] Despite Bowles’s preference for Tissot’s more serious work, he understood that the success of his publication rested upon its irreverent satire and in 1872 and 1873, the artist was joined by a succession of caricaturists of different nationalities and skills. Indeed, due to Pellegrini’s celebrity, the magazine became an attractive prospect for foreign artists seeking the rich patronage of London society.[18] These included Thomas Nast, an American political cartoonist, and the Italian sculptor, painter and caricaturist Adriano Cecioni. Melchiorre Delfico, from whom Vanity Fair’s caricature style was derived, also contributed eight drawings during these years.

By 1873 Bowles was again looking for a new caricaturist and John Everett Millais suggested Leslie Ward, whose work was strongly influenced by Pellegrini’s style. Thus began his long-running association with the magazine, and under the pseudonym ‘Spy’ he turned its caricatures into a national institution.[19] Ward was industrious and dependable in contrast to Pellegrini’s mercurial nature, and Bowles increasingly came to rely upon him. Whereas Pellegrini played the role of the bohemian, Ward saw himself as part of the Establishment. Due to his family connections and personal acquaintances he was able to move easily in high social circles. This could result in caricatures that were overly sympathetic, if not flattering, to women, the nobility and royalty.[20] In 1877 Tissot left the journal and Théobald Chartran, another Frenchman, filled his place. Chartran had earned his reputation but not his fortune as a painter of large-scale history paintings, and Bowles provided him with socially advantageous Vanity Fair commissions, enabling him to leave London in 1884 to pursue a successful career as a society portraitist in Paris and New York.[21] In the same year German artists Franz Goedecker and Constantine de Grimm were employed to provide portraits of a few celebrated compatriots to mark various current festivities in Germany. Other occasional contributors included Alfred Thompson (1870), Joseph Middleton Jopling (1883) and Francis Carruthers Gould (1879–99).[22]

After twenty years, Bowles was content to leave most of the illustrations to Ward, his focus having shifted elsewhere. He became more involved in politics and had other newspaper interests including The Lady, which he founded in 1884. In 1889 he sold Vanity Fair to Arthur Evans for £20,000 and A.G. Witherby replaced him as editor. This did not greatly alter the character of the magazine and Pellegrini’s death in January of that year left Ward in charge of a new and larger group of caricaturists. Excluding Ward (who continued to submit caricatures until August 1911), the only other regular contributor was Jean Baptiste Guth. Matthews and Mellini argue that during the 1890s, the quality of caricaturing began to fluctuate; some of the old sharp wit and irreverence was lost.[23]

The twentieth-century Vanity Fair was a largely commercial affair, owned by Alfred Harmsworth and edited by Frank Harris (1907–1911), but despite a decline in the final years, the magazine continued to function as a proving ground for promising young artists. Some, like Max Beerbohm, who contributed nine witty, economical caricatures, went on to greater fame.[24] The very last caricature, featuring Joseph Chamberlain, appeared on 14 January 1914. In February of that year the publication was absorbed by Hearth and Home. In 1913 an American magazine of the same name but unconnected with the Victorian version was launched by Condé Nast. It ran until 1935 and was revived in 1981 by Condé Nast Publications. 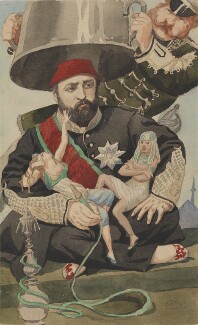 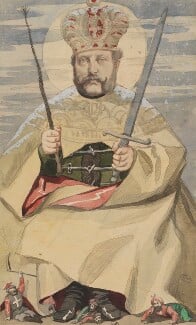 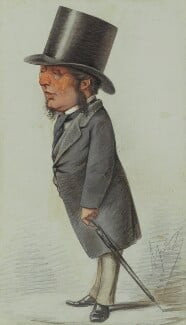 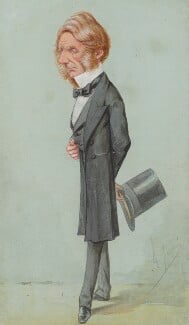 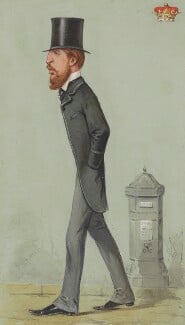 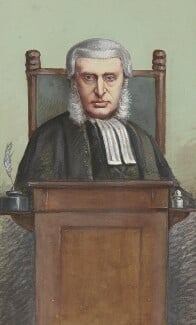 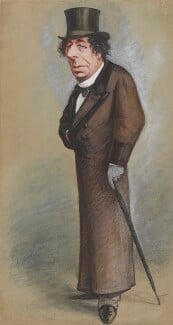 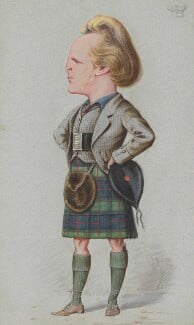 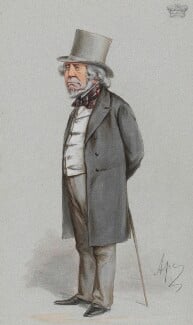 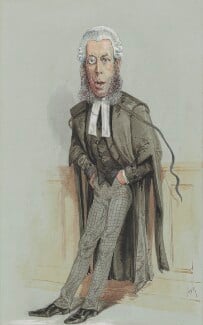 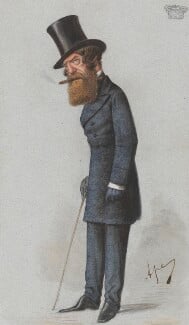 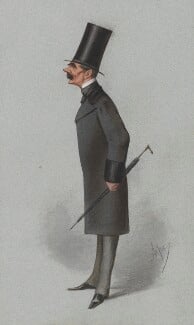 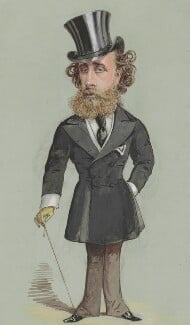 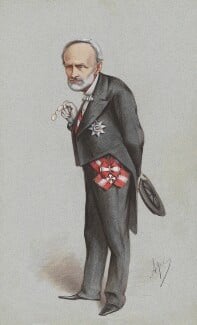 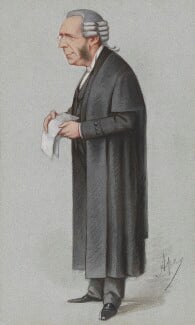 by Carlo Pellegrini
watercolour, published in Vanity Fair 6 May 1871
NPG 2712 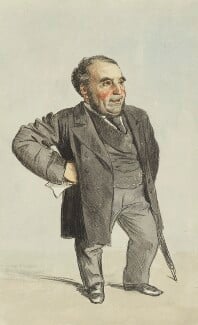 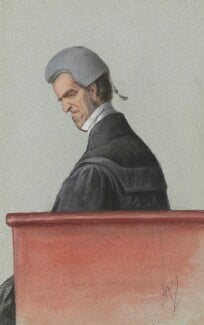 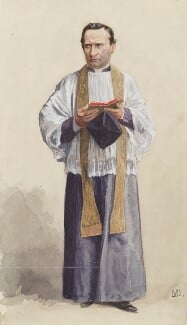 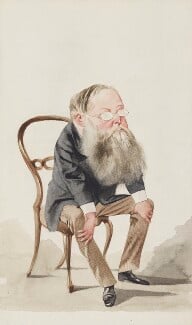 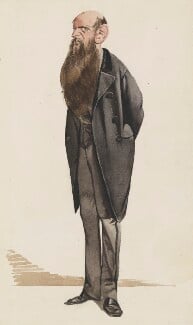