The Miracle
by Stephen Shankland
oil on board
© the artist

Stephen Shankland (b.1971) is a Scottish artist and graphic designer living and working in Aberdeenshire. He studied at Grays School of Art and has exhibited widely, including in the BP Portrait Award 1999. The Miracle is a portrait of Stephen's wife Kelly and son Connor, who was born prematurely in January 2003. 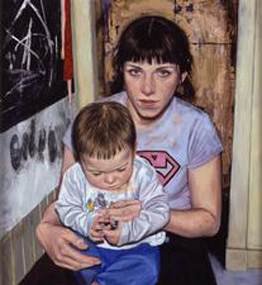