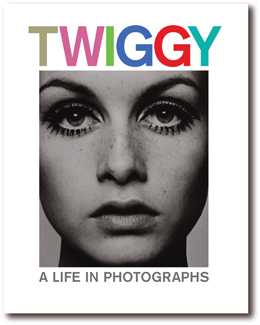 With contributions by Terence Pepper, Robin Muir and Melvin Sokolsky.

This stunning collection of photographs explores Twiggy's extraordinary life in front of the camera. Launched with a famous haircut by Leonard and photographs by Barry Lategan in 1966, Twiggy was the world's first supermodel. For the next four yeas she helped define ‘Swinging London' and she remains today an internationally recognized name and face.

In her own words, Twiggy describes distinguished photographers with whom she has collaborated - including Richard Avedon, Cecil Beaton, Douglas Kirkland, Annie Leibovitz, Steven Meisel, Norman Parkinson, Jeanloup Sieff, Melvin Sokolsky, Bert Stern, Ronald Traeger, Sølve Sundsbø, Brian Aris, Bryan Adams and many others - and her memories of working with them.

Published to celebrate her 60th birthday and accompanying a Gallery display, this beautiful book documents her life through photographs. With over 100 illustrations, including works from the National Portrait Gallery, London and many private collections, it also features Twiggy's personal selection of photographs, snapshots and memorabilia. An illustrated chronology traces highlights in her career, including her starring role in Ken Russell's film The Boy Friend (1971), for which she was awarded two Golden Globes, and her Tony-award-nominated appearance in the Broadway musical My One and Only (1983-4).

Terence Pepper is Curator of Photographs at the National Portrait Gallery, London. Widely published, his recent books include Horst Portraits (2001) and Beaton: Portraits (2004). In 2002 he was made an Honorary Fellow of the Royal Photographic Society and awarded an OBE for services to photography and art. In 2008 Pepper co-curated Vanity Fair Portraits 1913-2008 with David Friend, for which they won the Lucie Award for Photography Curator/Exhibition of the Year.

Robin Muir is a Contributing Editor to British and Russian Vogues. He is the author of Norman Parkinson: Portraits in Fashion (2004) and In Camera: Snowdon and the World of British Art (2007), as well as several books on the history of fashion photography. He has curated exhibitions for the National Portrait Gallery and the Victoria & Albert Museum, both London, The Scottish National Gallery of Modern Art, Edinburgh and the Yale Center for British Art, New Haven.