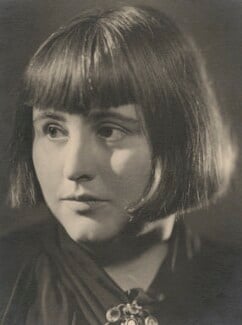 The crime novelist Margery Allingham was born in Ealing in 1904. Her father, Herbert John Allingham, edited the non-conformist weekly The Christian Globe, and the London Journal, and was a prolific writer of popular fiction. Allingham's mother, Emily Hughes, was equally prolific as a writer, and her aunt Maud Hughes was the founder-editor of Picture Show, an early film magazine. The family moved to Layer Breton in Essex when Allingham was five, and in 1917 to Westbourne Terrace Road, Paddington, the year in which her first published piece appeared in Mother and Home. She continued to write for magazines such as Sexton Blake, Girls' Cinema, and later the Strand Magazine.
Allingham met her future husband, the graphic artist and designer Philip Youngman Carter (1904-69), in 1921, and, as students at the Regent Street Polytechnic, they worked together on her play Dido and Aeneas (1922), for which he designed the sets. Youngman Carter designed the dust jacket for Allingham's first novel Blackkerchief Dick (1923), and many subsequent ones. They embarked on a life-time partnership, marrying at St Giles-in-the-Fields in 1927, and moving to Tolleshunt D'Arcy, Essex in 1935.

In 1926 Allingham began writing a mystery serial for the Daily Express published later as The White Cottage Mystery (1928). She first wrote about the detective Albert Campion in The Crime at Black Dudley (1929), and Campion quickly joined the ranks of fictional gentlemen detectives who include Dorothy L. Sayers' Lord Peter Wimsey and Agatha Christie's Hercule Poirot. Campion himself was joined in Allingham's cast of characters by the ex-burglar Magersfontein Lugg in Mystery Mile (1930), and by Lady Amanda Fitton in Sweet Danger (1933). Allingham also wrote under the pseudonym Maxwell March. She was asked by her American publisher to write a factual account of life in wartime England. The result, The Oaken Heart (1941), is the story of Tolleshunt D'Arcy in wartime.

The Tiger in the Smoke (1952) became a film in 1956 starring Donald Sinden as Campion and Bernard Miles as Lugg. Her last book Cargo of Eagles (1968) was completed by her husband. In 1989 the BBC television series Campion was screened with Peter Davison as Campion, and a second series followed in 1990.