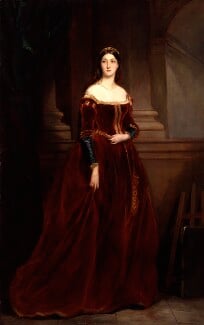 Research for the Later Victorian Portraits Catalogue has resolved some of the puzzles relating to the full-length portrait of the artist and illustrator, Louisa Anne, Marchioness of Waterford, attributed to Sir Francis Grant. This shows Lady Waterford wearing a red velvet dress in mediaeval or Tudor style, in a large stone-built hall; to the right are an easel and portfolio, allusions to her own artistic practice.

The first puzzle is the size of the canvas – relatively small for a full-length aristocratic portrait. The second puzzle is that Grant painted a full-size full-length of the same sitter at the time of her marriage in 1842, which shows her in a white evening gown; this remains in the ancestral Waterford home in Ireland and its relation to the Gallery’s portrait has been obscure. Further, the Gallery’s portrait is neither signed nor listed in Grant’s Sitter Book (an account of all portrait commissions, with dates, details and prices), a copy of which is in the Gallery’s Archive.

So is the portrait by Grant? And when and why was it painted?

Research revealed a reference by Augustus Hare to a portrait of Louisa Waterford as ‘a full-length in a square-cut red velvet dress’ which is evidently the present work, with the added information that it ‘belonged to Lord Ossington, and long hung in the drawing-room of the Speaker’s House at Westminster’.  Ossington, formerly John Evelyn Denison MP, was Speaker of the House of Commons from 1857–72. He and his wife Charlotte were also long-standing friends of the widowed Lady Waterford.

Further research into the Ossington papers at Nottingham University Library discovered a letter from Grant, beginning: ‘Dear Denison / I have broken ground on Lady Waterford’s picture – & hope about the middle of next week to be able to show it to you.’ Within the letter is a compositional ink sketch, over the note ‘This is something like the arrangement’, which shows the full-length figure, column and a roughly delineated urn in the position occupied by easel and portfolio. Though the letter is undated, a reference to Lady Waterford’s impending residence in Northumberland places it in 1859, the year she moved to Ford Castle.

Thus the attribution and date of the Gallery’s portrait of Lady Waterford are confirmed. It can be inferred that the portrait was a commission by the Denisons, presumably for reasons of personal friendship.  The exact reasons remain to be clarified, but both costume and setting offer clues. Research into Louisa Waterford’s oeuvre disclosed the existence of a watercolour sketch in a private collection depicting herself in two contrasting gowns, drawn at the time of the famous Eglinton Tournament 1839.  Sent to a friend, this is inscribed ‘Your humble servant / morning / evening’. Under ‘morning’ she is wearing a dark red dress with square neckline, as seen in Grant’s portrait.

The Eglinton Tournament was an elaborate costume party, lasting several days, with medieval-style jousting and banquets. According to her mother, Louisa’s ‘costumes were much admired, and looked simple and in good taste beside some of the more elaborately embroidered’. Eglinton was also where she first met her husband, who took part in the jousts wearing imitation armour and later died prematurely on the hunting field.  By inference, she retained her velvet gown, with its gold embroidery at neck, sleeves and hem, over blue under-sleeves, together with the red and gold hair fillet worn seen in Grant’s portrait, and chose to be portrayed thus, in memory of 1839. This would explain her relatively youthful appearance in the present work

The medieval-style setting, may thus also refer to Eglinton, or possibly be Grant’s invocation of Lady Waterford’s new home, Ford Castle, which in 1859 she described as having ‘much of its old romantic form … in the old towers of hoary stone, overlooking the field of Flodden, you can imagine something of the time of Marmion … the walls are eight or ten feet thick’.