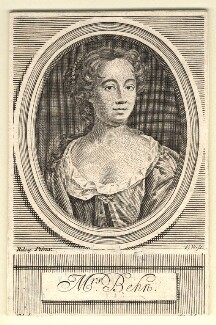 Dramatist and novelist; spied for Charles II in Antwerp. Aphra Behn published her novel Oroonoko, or the History of the Royal Slave in 1688. It was adapted for the stage by Thomas Southerne and was performed every season for almost 100 years. Although Behn's depiction of her hero as a 'noble savage' is now seen as a sentimental stereotype, Oroonoko became an important text for the abolition movement and those attempting to challenge the racist writings of scientists and philosophers in the coming years.