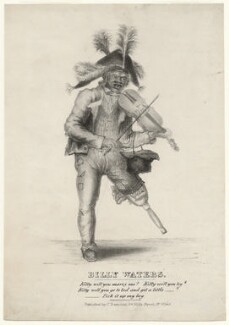 A former Royal Navy Sailor, Billy Waters lost his leg falling from a topsail yardarm. Following his accident he made his living playing a fiddle on the streets of London in order to supplement his pension and support his wife and two children. He became known as The King of Beggars and featured in Pierce Egan's Life in London (1821). At the end of his life he became ill and entered the St Giles Workhouse. He died in 1823 and was buried in St Pancras Cemetery.