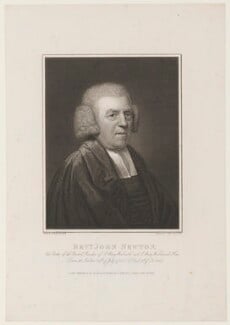 After the death of his mother aged six, Newton accompanied his father on punishing sea voyages. He later went to work for traders in enslaved people at sea and in West Africa, itself. In 1750, at the age of 25, Newton became captain of his own slave ship, transporting human cargo between the West African coast and British colonies in the Caribbean. He gave up this work after a number of religious epiphanies led him to convert to Evangelical Christianity. He became an active abolitionist, publishing Thoughts on the African Slave Trade (1788) and working with William Wilberforce, the leader of the Parliamentary campaign for abolition. He was also friends with poet William Cowper, whom he comforted during periods of mental ill health. Newton’s personal experiences, work on the abolition campaign, and evangelical beliefs inspired his writing of the hymn Amazing Grace, with its famous and poignant verse:

‘Amazing grace! How sweet the sound
That saved a wretch like me!
I once was lost, but now am found;
Was blind, but now I see.’