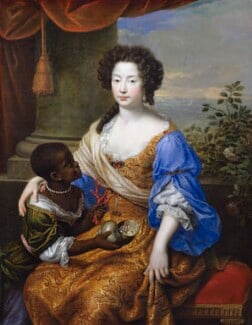 Louise de Kéroualle came first to England from France in 1670 as a maid of honour to Charles II's sister, the Duchess of Orleans. She returned to become the king's mistress in 1671, with the encouragement of the French government, who hoped she would be a diplomatic asset. Created Duchess in 1673, she bore Charles one son, Charles, Duke of Richmond (1672 -1723), and exercised some influence at court. The enslaved African child's identity is unknown and she is included only to confirm the status of her owner. She is shown presenting precious coral, pearls and shell to the duchess to emphasise her wealth and position. The child's dark skin also emphasises the whiteness of the duchess's complexion.