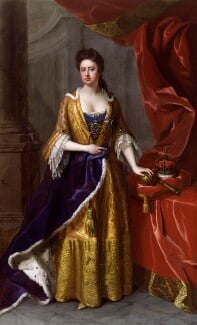 Reigned 1702-1714. Anne was the second daughter of James, Duke of York (later James II), and Anne Hyde. In 1683 she married Prince George of Denmark; she had eighteen pregnancies but none of her children survived childhood. Throughout her reign she was surrounded by warring political factions; she favoured Tory and High Church principles. Anne was intimate with and dependent on Sarah, Duchess of Marlborough, whose husband, the Duke, controlled the war against France. However, she dismissed the Marlboroughs in 1711, largely because of her sympathy with Tory opposition to the Duke's conduct of the war. The most important constitutional landmark of her reign was the Act of Union with Scotland in 1707.

Queen Anne continued the tradition of royal support for the British slave trade. In 1712 she announced that she had secured an exclusive contract for the British nation to provide enslaved Africans for the Spanish West Indies for thirty years. The Government sold the contract to the newly founded South Sea Company for £7.5 million. Queen Anne also secured over 20% of the stock for herself.