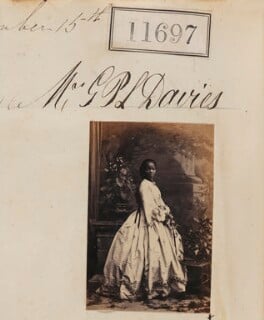 Sarah Davies was brought to England by Lt Commander Forbes of the HMS Bonetta in 1850. Forbes had been given the young girl as a gift by the King of Dahomey (Benin) with whom he had been trying to negotiate an end to the king's involvement in the slave trade. Queen Victoria took financial responsibility for the young girl, and paid for her education in Sierra Leone and afterwards in Brighton. Photographs were taken in London following Sarah's marriage in Brighton to James Davies, a successful merchant. The couple lived in Lagos, although they visited England on a number of occasions when Sarah would visit her godmother, Queen Victoria.