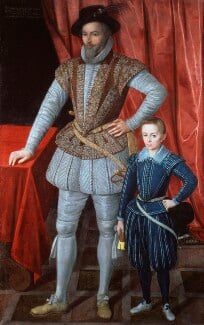 A favourite of Elizabeth I, explorer and writer, Ralegh also attempted to establish colonies in America. He played a brilliant part in expeditions to Cadiz in 1596 and the Azores in 1597, and made several attempts to find gold in South America. He is credited with introducing tobacco and potatoes to England. Alternately in and out of favour with Elizabeth I, he was finally executed by James I for attacking the Spanish against his orders. His surviving literary works include the History of the World (1614) and a number of poems.

Towards the end of the sixteenth century it became fashionable for members of the aristocracy to have one or more enslaved Africans among their household servants. One of the early creators of this trend in the 1590s was Lady Ralegh, the wife of Sir Walter. Owning and displaying an African slave became very fashionable and remained a popular indicator of status well into the eighteenth century. Just one example is Mignard's portrait of the Duchess of Portsmouth with an unidentified young African, which begins this trail in the Main Hall of the Gallery.