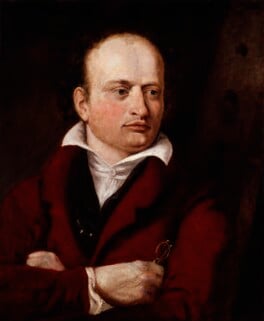 Benjamin Robert Haydon (1786-1846) was an artist of talent and intense ambition, obsessed with the idea of his own genius. He was determined to paint great history paintings according to academic ideals. There was little popular demand for this type of work however and Haydon's refusal to abandon his high-minded agenda was to land him in considerable financial difficulties. In 1809 he fell out with the Royal Academy and began to exhibit his paintings independently.

In 1812 Haydon proposed decorating the Houses of Parliament with historical subjects but was later beaten to the commission. Monumental works such as The Anti-Slavery Society Convention, 1840 gave him some scope to realise his ideals. Despite a degree of success, Haydon was convinced of his failure as an artist and took his own life in 1846. He left behind numerous diaries full of information about contemporary politics, people and paintings which provide an unparalleled insight into the Regency age.