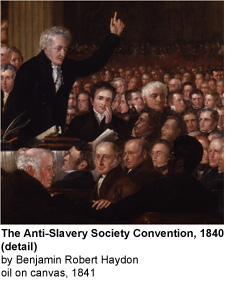 Haydon chose to depict the chairman Thomas Clarkson speaking directly to the freed slave Henry Beckford. Beckford's prominence was controversial and Haydon's composition became a political as well as an artistic matter. The painter moved those who complained to the back rows for their hypocrisy. 'Now I who have never troubled myself in this Cause' he wrote in his diary 'gloried in the Imagination of placing the Negro close by his Emancipator. No - the Emancipator shrunk. I'll do it though. If I do not, d - me'.

Haydon completed an oil sketch of the central group almost as soon as the Convention was over and continued working with exhaustive effort for nearly a year afterwards. At a late stage and much to his annoyance he was requested to add a further thirty-one heads. 'If they like they shall have heads all over like a peacock's tail', he complained. In the final canvas there are 138 identifiable portraits.