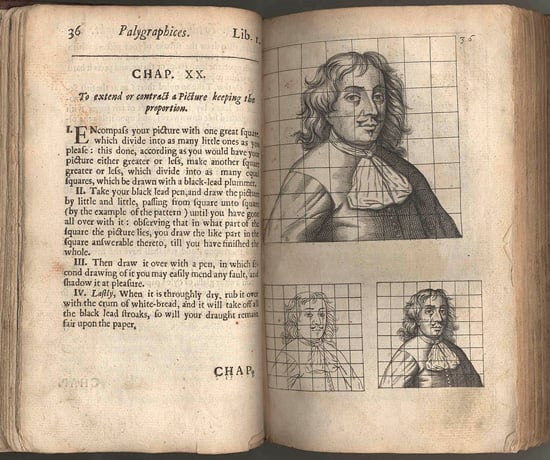 Chapter XX To extend or contract a picture keeping the proportion from Salmon's 1675 Polygraphice or The Arts of Drawing, Limning, Painting, Washing, Varnishing, Gilding, Colouring, Dying, Beautifying and Perfuming

The Drawing Machine in action: Workshop at the National Portrait Gallery, attended by Eastbourne College students

In "Making a Perspective Drawing" we looked at an imaginary form of perspective drawing. Fifteenth century artists wanted to find a way of being able to record the natural world more accurately, so they invented a number of different machines to help them draw what was in front of them. Leon Battista Alberti, 1404 - 1472, wrote the first general treatise Della Pittura on the laws of perspective in 1435. Alberti's Frame was the name of the most successful of the drawing devices invented. This drawing machine is made up of a square wooden frame, across which horizontal and vertical threads are stretched at regular intervals to form a grid. A foot or so in front of this gridded frame is a rod, the same height as the distance from the bottom of the frame to the middle of the grid. This rod is important because, by lining up the eye with the rod and the centre of the grid, the eye is always fixed in the same position when looking at things. 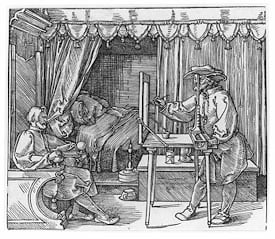 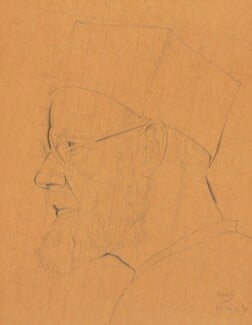 By looking at subjects through this grid, they become divided up into squares - a bit like looking at a map. This process makes it easier to work out where each object is in relation to everything else.

The artist using the drawing machine would also have a piece of paper in front of them gridded up with the same number of squares as in the wooden frame. Everything the artist wanted to draw would be transferred from the square where they saw it in the grid, onto its twin square on the piece of paper. If they saw a person's nose halfway down the fifth square up and the second square across, then that is where they would draw it on the matching paper square.

By using the drawing machine, artists found out just how distorted the world appears when you look at it from odd angles.

Below is a list of key features for the construction of your own drawing machine. Similar devices have been used by many artists since the renaissance, including Alberti and Durer.

By Lining up one eye only with the rod and the centre of the grid, it allows you, not only to be able to plot what you see onto a piece of paper gridded up with the same number of squares, but to reposition your eye in exactly the same place as before whenever you look away from the grid to your drawing.

Please note: Because of the fact that in using this piece of equipment you will be keeping your eye very close to a pole, it must be stressed that the use of this drawing machine can be potentially very dangerous. It must therefore only be used under the strict supervision of an adult. The National Portrait Gallery accepts no responsibility for any injuries caused through accidents or your own inattention in using this tool.

1. 'Sight' In early plans for drawing machines this would have been a spike or point. For safety reasons this has been adapted to a ring in this design; as working with your eye so close to a spike is extremely dangerous. The ring is not for looking through, it is merely a device to keep your eye lined up with the centre of the grid. It is most comfortable if you look just over the top of this ring when drawing.

2. Removable dowell rod. This must be the same height (including the ring) as the distance from the bottom to the centre of your grid. It must also be centred horizontally.

3. Base. (suggested minimum thickness: 12mm) The same size as the grid for stability and folding purposes, it is easier (with practice) to have your drawing on this rather than in front of the rod, allowing you to keep your eye close to the rod.

4. Gridded frame. (suggested minimum thickness: 12mm). The surrounding frame for the grid. It will support the Perspex and allow it to be hinged to the base.

5. Grid. (Suggested minimum size: 40cm). Originally this grid would have been made out of threads arranged at regular intervals horizontally and vertically. The same effect can be achieved by using a sheet of Perspex upon which a regular grid has been drawn with a permanent marker. Do not use glass. It can be helpful if you put a small sticker or dot where the centre lines cross in the middle of this grid.

6. Catches. Simply to stop the grid from falling forward or backwards and hurting you or someone else. Using a latch is only a suggestion, visit your ironmongers or hardware store taking a print of this plan and ask them for alternative suggestions. (The grid could be permanently secured to the base, but this would prevent it from being foldable)

7. Hinges. To attach the frame to the base and allow the drawing machine to be folded flat when not in use