Charles I by Unknown artist, oil on copper miniature with 17 mica overlays (NPG 6357) 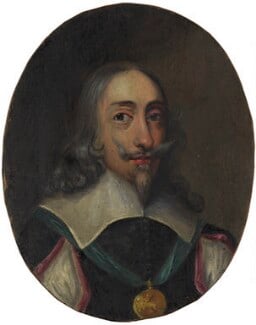 When this unusual portrait was offered by an art dealer in 1996, the Gallery already owned ten painted portraits of King Charles I (1600-49), and over 200 printed images. The portrait was nevertheless considered a valuable addition to the Collection as it gives a fascinating insight into seventeenth-century history and visual culture.

The oil on copper miniature of the king is accompanied by a set of 17 overlays made from a transparent glass-like material called mica.  These can be laid over the miniature in order to dress him in different costumes and introduce other figures. Together they tell the story of his imprisonment, trial and execution on 30 January 1649. The final scene shows an angel trumpeting his arrival in heaven.

Nothing certain is known about the portrait’s origin and provenance but it can be dated to the second half of the seventeenth century. It is possible that the portrait was produced in Holland and collected by exiled Royalists or smuggled into England during the period of the Commonwealth and Protectorate (1649-60). Despite attempts to suppress royalist sympathy, items such as this fuelled a growing cult of Charles I as King and Martyr. The popularity of devotional miniatures such as this can be gauged by the number of similar examples that survive in public and private collections today.  The Gallery collecting policy usually favours portraits made during the sitter’s lifetime but an exception was made for this fascinating posthumous portrait.