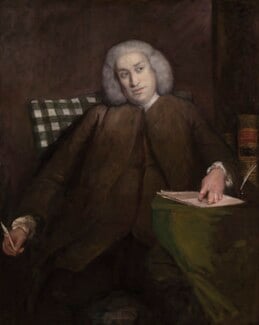 This portrait of Dr Samuel Johnson by Sir Joshua Reynolds was begun in 1756.  The painting was never finished and remained in Reynolds’ studio until 1798, when it was given to James Boswell, Johnson’s biographer.  Since then, it has had a complicated history.  Several conservation campaigns have attempted to improve the troubled appearance of this image of an important national figure.  The intention has always been to return the work to its ‘original’ appearance, although ideas about how Reynolds intended the painting to look have changed over time.

The portrait was given to the National Portrait Gallery by an anonymous donor in 1911.  It had been subjected to a number of restoration campaigns in the nineteenth century which had attempted to improve the decayed surface, which was badly faded. [1] In 1976 the Gallery decided to embark on a significant restoration treatment.  Using the technical and research tools available at the time, conservators decided that the prominent wooden card table, books, inkwell and second quill were later additions to the composition, as they were painted in different media and clearly by a different hand.  The card table was removed to reveal a table with a green tablecloth beneath it, while the books, inkwell and quill were covered up using easily removable paint. 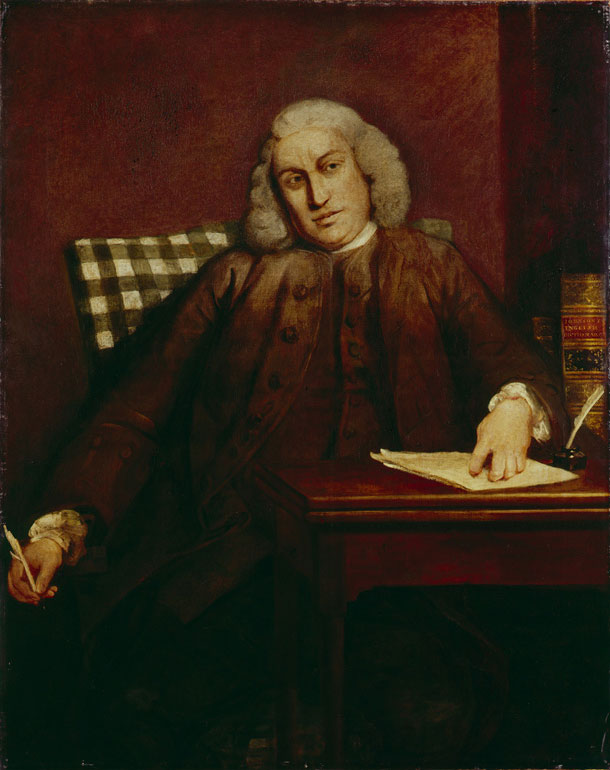 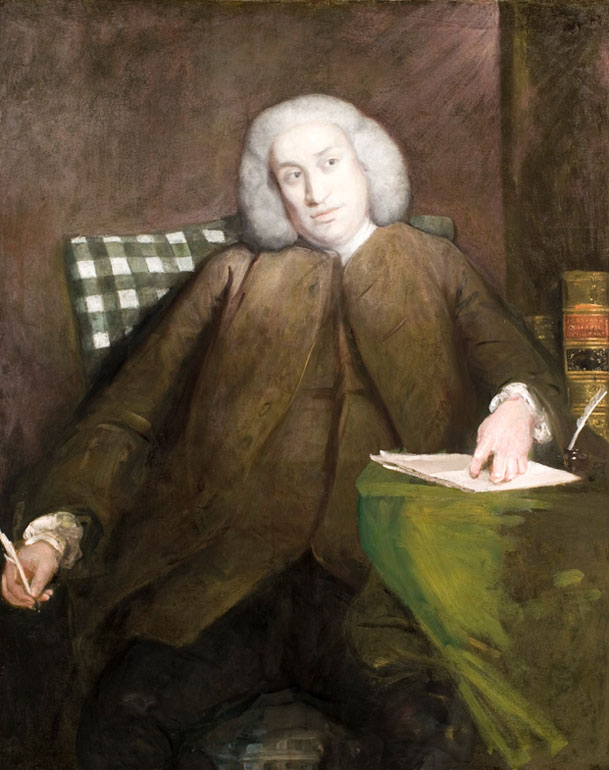 In 2007 the painting was damaged by a member of the public, and this prompted the Gallery to undertake another programme of restoration.  In advance of this, an academic symposium was held, and experts discussed the issues arising from the painting’s history and conservation.  New research indicated that when the painting was engraved for the frontispiece to Samuel Boswell’s Life of Dr Johnson (1791) this process was acknowledged by Reynolds, despite the fact that he was developing blindness during this period.  A recently discovered series of proofs annotated by Reynolds suggests a number of changes to the printed portrait, including the addition of the books, inkwell and second quill on the right hand side of the image.  Johnson’s face was also aged, transforming a youthful portrait into an image of an older, celebrated literary figure.  It is likely that the additions to the painting were carried out by someone working with Reynolds’s knowledge to bring the canvas in line with the engraving, although it is not clear whether these were added in Reynold’s studio or by a separate artist.  However, given that Reynolds was aware of these details being added to the composition as well as Johnson’s more aged appearance in the print, it is likely that he also approved of these changes to the painting.  These findings contributed to the decision to reveal the books, inkwell and quill which can be seen in the portrait today. [2]